US, China to Cut Gases Linked to Climate Change

Update Required To play the media you will need to either update your browser to a recent version or update your Flash plugin.
By Christopher Cruise
12 November, 2014


The leaders of the United States and China say they have reached an agreement to reduce pollution linked to climate change. President Barack Obama and Chinese President Xi Jinping made the announcement during a joint news conference in Beijing.

Companies in the United States and China produce more carbon dioxide than those in any other country. Studies have linked rising levels of the gas to rising temperatures on Earth's surface.

President Barack Obama, right, smiles after a group of children waved flags and flowers to cheer him during a welcome ceremony with Chinese President Xi Jinping at the Great Hall of the People in Beijing, China Wednesday, Nov. 12, 2014. 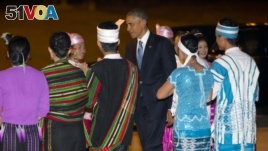 President Barack Obama is greeted upon his arrival on Air Force One at Naypyitaw International Airport, Nov. 12, 2014, in Naypyitaw, Myanmar.

A meeting of the Association of Southeast Asian Nations has opened in Myanmar's capital, Nay Pyi Taw. Delegates to the talks represent more than 600 million people.

On Thursday, the 9th East Asia Summit will begin in Myanmar. President Obama plans to attend the summit. So are top officials from China, South Korea, Australia, India, Japan and Russia.

Ukraine to prepare for attack from separatists

The Ukrainian defense minister says he has ordered his country's forces to prepare for a possible attack by pro-Russian separatists in eastern Ukraine. Ukraine's defense minister told a government meeting on Wednesday that additional forces have joined the separatists.

On September 5th, the rebels and Ukraine's government agreed to a cease-fire. But there have been clashes in eastern Ukraine since then.

North Atlantic Treaty Organization officials say they have seen Russian military equipment entering eastern Ukraine in the past two days. The equipment is said to include Russian tanks and artillery. 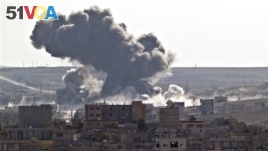 Smoke rises over the Syrian city of Kobani, following a US led coalition airstrike, seen from outside Suruc, on the Turkey-Syria border Monday, Nov. 10, 2014. Kobani

Syrian activists say seven weeks of American-led air strikes have killed at least 860 people in Syria. They say most of the dead were Islamic State militants.

On Wednesday, the Syrian Observatory for Human Rights said the number of dead could be much higher. The group said at least 50 civilians were among those killed in the attacks.

*This report was based on stories from VOANews.com and VOA's CN wire. Christopher Cruise wrote this story for VOA Learning English. George Grow was the editor.

pollution - n. the release of dangerous or unpleasant substances into the air, soil or water

represent - v. to act in the place of someone else; to substitute for; to serve as an example

separatists - n. a member of a group of people who want to form a new country or religion

strikes - n. an act or example of striking