US Cities Depend on Immigrants for Growth

Update Required To play the media you will need to either update your browser to a recent version or update your Flash plugin.
By Pete Musto
21 March 2020


Jawad Rahimi is a native of Afghanistan. He arrived in the United States 16 years ago after spending time as a refugee in Azerbaijan. Since then, his store in St. Louis, Missouri has become a needed part of the city center.

The area is full of empty homes and buildings. A usual day brings a continuous flow of people who come for alcohol, food or just to talk.

"I think they're addicted to me," he told the Reuters news agency. He said people exchange friendly words with him as they buy their goods in his store. 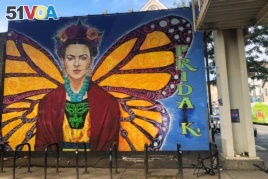 Mural of Mexican artist Frida Kahlo is pictured in the Pilsen neighborhood, initially home to immigrants from eastern Europe and named after the Czech city, in Chicago, Illinois, U.S. September 24, 2019.

St. Louis and several other cities in Midwestern states have come to depend on people like Rahimi in urban areas.

Reuters examined government data for that period. It found that immigration reversed what would have been major population decreases in 18 cities. Among them are Detroit, Michigan; Milwaukee, Wisconsin and Akron, Ohio. Many are cities that have depended on manufacturing.

In St. Louis and other places, immigrants are helping halt population decreases in urban areas. The cities are struggling to maintain their population as people move to areas with higher economic growth.

To officials in St. Louis, this creates a problem. Where do you find the people needed to buy homes, start businesses and keep the population from shrinking?

Betsy Cohen is executive director of the St. Louis Mosaic Project. The group aims to make St. Louis's immigrant population the fastest growing in the country. "When those numbers fall, it is hard to have the growth...we want," said Cohen. "Every person counts," she added, "All skill lines. All families. We need people."

The immigration debate nationally often brings attention to issues like border security and separation of families caught entering the country illegally. But cities like St. Louis are looking to immigration as a way to strengthen their economies.

Recently, President Donald Trump gave state governors the power to reject refugees in their states. Only the state of Texas chose to do so. The order is being disputed in courts, but state leaders of both political parties have said they still welcome refugees.

Pittsburgh, Pennsylvania; Buffalo, New York and many other places, mainly in the Northeast and Midwest, have also come to depend on immigrants.

Some economic experts worry about the effects of population loss in some parts of the country.

Last year, economists Adam Ozimek, Kenan Fikri, and John Lettieri wrote a report for the Economic Innovation Group in Washington D.C. The report found that smaller populations provide less money in taxes to local governments. This, they found, leads to a decrease in public services and property values. So, fewer businesses start and existing ones have fewer reasons to stay.

The group argues that, while some parts of the country are losing people and others are gaining, immigration is controllable. The economists suggest that the United States could expand immigration like Australia and Canada have. They said the U.S. could do so by increasing the number of visas aimed at areas with population problems.

Howard Schneider reported this story for the Reuters news agency. Pete Musto adapted it for VOA Learning English. Mario Ritter, Jr. was the editor. Write to us in the Comments Section or on 51VOA.COM.

addicted – adj. having an unusually great interest in something or a need to do or have something

urban – adj. of or relating to cities and the people who live in them

reverse(d) – v. to change something to an opposite state or condition

maintain – v. to cause something to exist or continue without changing

patriotic – adj. having or showing great love and support for your country