Update Required To play the media you will need to either update your browser to a recent version or update your Flash plugin.
By Ashley Thompson
20 January 2021


Eleven international students have taken legal action against companies and a small community college in the central United States. A lawsuit by the students accuses the companies and college of human trafficking and involuntary servitude.

Nine students from Brazil and two from Chile filed the lawsuit earlier this week.

It claims that Western Iowa Tech Community College and J&L Staffing -- both in Sioux City, Iowa -- urged the students to come to the U.S. under a work- and study-based visa exchange program. The students, it says, were then forced into factory jobs that had no educational value and were unrelated to their fields of study. 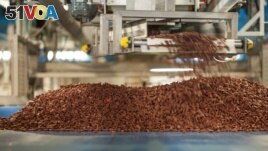 FILE - A pet food production line is seen in May 2015. Royal Canin, a pet food manufacturer, is accused of involuntary servitude related to its South Dakota plant. Also named: a community college, recruitment company and packaging company, all in Iowa.

The lawsuit states that the students were paid much less than American employees. And it says money was taken out of the students' earnings to pay the college and the staffing company.

Civil rights lawyer Roxanne Conlin represents the students. She says the lawsuit seeks to demand that the college provide the students with an education, as promised.

The students were told they would be offered work experience in fields such as culinary arts and robotics, Conlin said. But they instead received jobs at two nearby factories: Royal Canin pet food plant and Tur-Pak foods, which puts together food products.

Royal Canin said in an email that it knew about the lawsuit but does not comment on active legal cases. J&L Staffing and Tur-Pak Foods did not answer messages seeking comment.

Conlin is asking the court to stop the college and companies from taking part in the work-and-study J-1 visa program. She is also asking the court to provide the students with an education and pay them money for past and future mental and emotional harm.

The students were signed up for classes at the community college. But they were kept away from the general student population, the lawsuit says. They only took classes with other Brazilians and Chileans in the J-1 visa program. The lawsuit also says college officials controlled when and where the students could work and under what conditions.

A spokeswoman for the community college denied the claims. "These accusations are completely untrue...and offensive. We look forward to defending the college and its employees in district court," said Andrea Rohlena, the college's director of marketing.

It is the second lawsuit against the community college and the companies. The first was filed in November and involved eight students from Chile.

The community college began its J-1 program in early 2019. By November of that year, the school was under investigation after an anonymous report was filed.

In January 2020, the college released a statement saying it had learned students in the program were unhappy. The school blamed a "failure to clarify expectations" and "a breakdown in communication" for some of the problems.

The community college ended the program in March 2020. It said it did so because of the coronavirus pandemic. The college said it bought airplane tickets for the students to return home. But many have chosen to stay in the United States, including the students Conlin represents.

The Associated Press reported this story. Ashley Thompson adapted it for VOA Learning English. Bryan Lynn was the editor.

servitude – n. the condition of being a slave or of having to obey another person

staffing – n. a group of people who work for an organization or business

culinary – adj. used in or relating to cooking

anonymous – adj. not named or identified

clarify – v. to make (something) easier to understand