Update Required To play the media you will need to either update your browser to a recent version or update your Flash plugin.
By Dan Friedell
18 December 2021


Well-known colleges and universities in the United States announced this week that they will end the first part of the school year early because of a rise in COVID-19 cases. They will also move final tests out of classrooms and onto computers.

Princeton University and Cornell University are part of the group that is closing school early. Students traditionally leave school for about one month after December exams.

Both Cornell and Princeton say nearly all of their students are vaccinated against COVID-19. 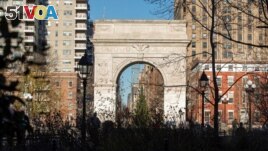 New York University recently said it would not allow gatherings on campus due to concerns about a rise in COVID-19 cases.

At Syracuse University in central New York, students will need to get a booster shot before coming back to school in January.

The schools also said some of the COVID-19 cases are from the Omicron variant first found in southern Africa in November.

Kent Syverud is one of the top leaders at Syracuse University. Until recently, he said, the school was feeling good about the part of the school year that starts in January.

"But Omicron has changed that," he said. He added that the school will try to keep students and teachers safe until more is known about the variant.

Mallika Gore is a student at Syracuse University from India. She spoke with VOA in early November for a story about her experience at school this year.

On Wednesday, she said she already has her booster shot, but she has some classmates from other countries who may not be able to get a booster before they go home. They will have to return to the U.S. early because boosters are not yet available where they live.

Gore said her parents wonder if she should come back to the U.S. in January.

"They have been reading the news," she said. "There are some articles saying it is supposed to peak in January."

"For me, it's the worry that if I come, what will be changed? I hope I don't have to, mid-semester, go back to my country. So, I think that's the worry."

The Associated Press news agency reports that over 20 colleges recently told their students and teachers to get boosters.

Universities throughout the U.S., including Boston University and the University of New Mexico, have asked people on their campus to get boosters.

The drug company Pfizer recently said a booster of their vaccine helps protect against Omicron.

Emily O'Brien is a first-year student at the University of Massachusetts, where most students are vaccinated. She said she was already planning to get a booster, but if the university requires it, more of her classmates will get a third shot.

O'Brien and her classmates will need to take a virus test before coming back to school in January.

Students at Middlebury College in Vermont recently went back to taking classes by video. At the University of Pennsylvania in Philadelphia, students are no longer allowed to gather except for classes.

The Cornell University COVID-19 website reported over 800 cases in the week ending December 13. There are more than 20,000 students at Cornell.

The school's student newspaper reports that Omicron came up in some tests, which is one reason for the decision to move the final exams out of classrooms.

The school also asked students to be sure they had a negative test before going home.

Martha Pollack is the Cornell president. She called the change "extremely dispiriting" in a message to students.

On Wednesday, New York University said it was canceling all sports events, parties and study groups.

Gore said it will be "frustrating" if her school imposes restrictions on in-person classes when she returns in January.

However, she said she is trying to think positively about the future.

"We have this virus, we know this is not going to go away soon," she said. "What can we do so we are still being safe but we are making the most of our college experience?"

Dan Friedell wrote this story for Learning English with additional material from the Associated Press. Susan Shand was the editor.

Do you think colleges in the U.S. will be restricted in January? Tell us in the Comments Section and visit 51VOA.COM.

booster – n. an extra amount of a substance (called a vaccine) that is injected with a needle into a person or animal to help protect against a particular disease

peak – adj. at the highest point or level

despiriting – adj. causing a loss of hope or enthusiasm