US Colleges Could See Increase in Students Unprepared for School

Update Required To play the media you will need to either update your browser to a recent version or update your Flash plugin.
By John Russell
20 August 2022


American colleges could see an increase in students unprepared for the demands of college-level work, education experts say.

Unprepared students have a higher risk of dropping out – an action that hurts everything from a person's long-term earnings to the health of the country's workforce.

High schools and the pandemic 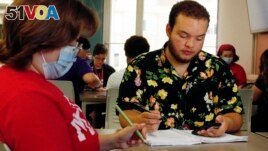 Angel Hope works on a math problem, part of an intense six-week summer bridge program for students of color and first-generation students at the University of Wisconsin, in Madison, Wis., July 27, 2022. (AP Photo/Carrie Antlfinger)

Across the U.S., there are many students like Angel Hope.

Hope graduated near the top of his high school class. But on a test — a University of Wisconsin exam that measures what new students learned in high school — all he could do was guess. It was like all the problems caused by the pandemic were catching up to him at once.

Hundreds of thousands of recent graduates are going to college this autumn after spending more than half their high school years dealing with the pandemic. These students experienced a move to online learning, the difficulties of U.S. teacher shortages, and large changes to their home lives.

Many students are believed to be far behind in learning.

Allison Wagner is head of All-In Milwaukee - a program that provides financial aid and other assistance to poor students, including Hope.

Wagner saw many students work part-time jobs in their last year of high school. She saw more students than ever who did not take math or science classes because of teacher shortages. "There is no way they are going to be academically prepared for ... college," she said.

Her group is spending more money to help students with summer classes in math or science. Still, she feels the setbacks will force some students to take more than four years to graduate or, worse, drop out.

Researchers say that online learning was difficult for students. For younger students, there is still hope that America's schools can close learning gaps. But for those who graduated in the last two years, experts fear many will struggle.

Colleges from New Jersey to California have been expanding "bridge" programs. These programs provide summer classes, often for students from poor families or those who are the first in their families to attend college.

In Hanceville, Alabama, Wallace State Community College this year used state money to create its first summer bridge program. Students can take three weeks of lessons in math and English in order to avoid remedial classes. Remedial classes are for students who need special help to improve in a subject. The school hoped to bring in up to 140 students, but just 10 signed up.

Amanda Ellis is a vice president of Kentucky's Council on Postsecondary Education. "We need these people to be our future workforce, and we need them to be successful," she said.

Months after struggling with his math test, Hope went to the University of Wisconsin-Madison for six weeks of classes in a summer bridge program. He took a math class that covered what he missed in high school. He signed up to take calculus in the autumn.

Hope also brought back study skills that he stopped using in high school. He started studying at the library. He rediscovered what it is like to enjoy school.

Most importantly, he says the experience changed his way of thinking. Now he feels like he is at school to learn, not just to get by.

"After this, I definitely feel prepared for college," he said. "If I didn't have this, I would be in a very bad place."

Collin Binkley reported on this story for the Associated Press. John Russell adapted it for Learning English.

graduate -- v. to earn a degree or diploma from a school, college, or university

guess – v. to form an opinion or give an answer about something when you do not know much or anything about it

academically – adv. of or relating to schools and education

calculus – n. an advanced branch of mathematics that deals mostly with rates of change and with finding lengths, areas, and volumes