Most Large US Public Colleges Fail to Keep Records on Suicides

Update Required To play the media you will need to either update your browser to a recent version or update your Flash plugin.
By Pete Musto
20 January, 2018


Most large public universities in the United States do not keep records of how many students have taken their own lives.

Yet many American colleges and universities are making investments in suicide prevention. And the demand for mental health services is rising.

These are just a few of the findings of a report by the Associated Press, or AP, news agency. The report was released in early January.

The Associated Press asked the 100 largest U.S. public universities for yearly numbers on student suicides. It found that only 46 currently keep such statistics.

Only 27 public universities have done so regularly since 2007.

Of the remaining schools, 43 said they do not keep records of student suicides. Nine others could provide only limited information. The nine did not answer questions about how regularly they recorded the number of suicides. Two other schools did not provide statistics.

Recording the number of student suicides comes with its own set of problems. But suicide prevention activists say that without this kind of data, school officials have no way to measure their success. They also say schools need to identify student behaviors that could offer greater understanding and help them save lives.

Gordon Smith is a former U.S. senator from Oregon. He became a suicide prevention activist after his son, Garrett, took his own life in 2003 while attending college.

"If you don't collect the data, you're doing half the job," Smith told the Associated Press. "We need information in mental health if we're actually going to be able to better tailor health and healing." 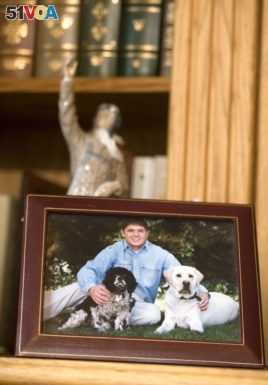 A photo of Garrett Lee Smith, the son of former U.S. senator Gordon Smith, who committed suicide at age 21 while attending college. His death lead to his father helping to create the Garrett Lee Smith Memorial Act, which gives money to suicide-prevention

The universities that do not keep records of student suicides include some of America's largest. They include Arizona State University in Phoenix and the University of Wisconsin in Madison, or UW-Madison.

News reports say the two schools have dealt with student suicides in the recent past, including two at Arizona State in 2017. University of Wisconsin health officials said they are finishing work on a recordkeeping system to follow the causes of student deaths.

Agustina Marconi, a specialist on disease, works at the University of Wisconsin. In a written statement, she said, "We will create a ... model to accurately document all student deaths at UW-Madison... Our findings ... will benefit other universities moving forward."

The issue of suicide has gained greater attention nationwide as some schools report today's students are arriving less prepared for college life. The American Psychological Association and other groups have called this a mental health crisis. And many schools have increased spending on mental health services to fight it. 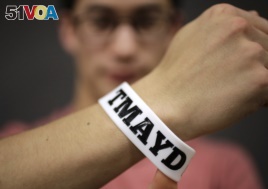 Massachusetts Institute of Technology student Andy Trattner shows a wrist band that features the acronym TMAYD for "Tell Me About Your Day," a campaign to encourage students to talk to one another.

Studies have found increasing rates of anxiety and depression among college students. But some experts say the problem only appears to be worsening. They say this is because students who might have said or done nothing in the past are making use of the increasing availability of help.

"It's unfortunate that people are characterizing this ... as a crisis," Locke said. "It's ... criticizing the exact people we've encouraged to come forward."

Research shows that young adults in college have lower suicide rates than those who are not college students. But most college students are also at an age when mental health issues like schizophrenia often start to develop.

U.S. government health officials have sought to support data collection efforts as part of a special program named after Gordon Smith's son. The program has given $76 million to more than 230 colleges and universities since 2005.

Schools have also separately spent millions of dollars on their own. They often add programs that teach life skills and train school employees to identify students in need.

The U.S. Department of Education has urged colleges and universities to collect data on student deaths. But it does not ask the schools to identify suicide deaths. And there are things that make them less likely to keep such records.

First, it is often difficult to confirm the cause of death. In addition, medical examiners do not always tell universities when a cause is identified. There are concerns about who is legally responsible for a death. Also, some families choose to keep the details of their child's death private. And not every school that collects this data counts suicides that happen off their grounds or during breaks.

In addition, if the statistics become public, some schools fear it could damage their public image.

Nance Roy is with the Jed Foundation, a nonprofit group that works with U.S. colleges and high schools on suicide prevention. Roy said "No school wants to be known as a school with multiple suicides. It's not good for business."

Activists in at least three states -- New Jersey, Pennsylvania and Washington -- have pushed to require universities to collect suicide data. But they have yet to have any success.

Much of this data comes from the Centers for Disease Control and Prevention, which does not keep records of college suicides.

Collin Binkley reported this story for the Associated Press. Pete Musto adapted the report for VOA Learning English. George Grow was the editor.

We want to hear from you. What else do you think schools can and should do to prevent student suicides? Write to us in the Comments Section or on 51VOA.COM.

tailor – v. to make or change something so that it meets a special need or purpose

accurately – adv. done in a wat that is free from mistakes or errors

benefit – v. to be useful or helpful to someone or something

counseling – n. advice and support that is given to people to help them deal with problems and make important decisions

characterizing – v. describing the character or special qualities of (someone or something

encourage(d) – v. to make someone more likely to do something

schizophrenia – n. a very serious mental illness in which someone cannot think or behave normally and often experiences delusions