US Companies Bought Fewer Robots in 2019

Update Required To play the media you will need to either update your browser to a recent version or update your Flash plugin.
By Jonathan Evans
17 February 2020


American companies put fewer robots in place during 2019 than they did the year before, Reuters news agency reports. That is the first decrease in shipped robots since 2015.

Robot shipments last year fell to 23,758. That is a more than 16 percent drop from the year before. That information comes from the Association for Advancing Automation, an industry group based in Ann Arbor, Michigan.

Robot shipments also fell in Mexico last year, decreasing 25 percent to 3,263. Shipments in Canada were about the same, with just over 3,000 robots shipped. 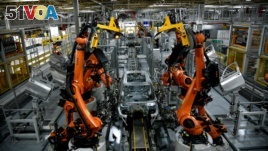 A major goal of President Donald Trump's administration has been to get manufacturers to bring jobs back to the United States. New robotics permit U.S. companies to compete with low-cost labor in China and other countries. Some experts, however, believe there is a slowdown in manufacturing.

Alexander Shikany is vice president of the Association for Advancing Automation. He said a slowdown is not likely to last a long time. He noted that orders for new robots in North America increased last year by 1.6 percent to 29,988 units.

The largest driver of that growth was a more than 50 percent increase in orders from carmakers. Shikany said the car industry is making robots part of their investment for the future.

U.S. carmaker General Motors recently announced that it was investing $2.2 billion to build electric trucks and self-driving electric vehicles at its factory near Detroit, Michigan.

Hytrol Conveyor Company, Incorporated is a private company in Jonesboro, Arkansas. It makes conveyor belts and sold over $200 million of products last year. The company did not cut back on new robots in 2019. It spent $1.9 million last year to automate its assembly line.

David Peacock is the company's president. He said the company realized three years ago that it would have trouble meeting demand without more robots.

However, the investments have not cut jobs. The number of workers at Hytrol Conveyor's factory has increased 18 percent over the past three years to 1,300. And the company has seen a nearly 25 percent increase in profits.

Timothy Aeppel reported this story for the Reuters news service. Jonathan Evans adapted it for Learning English. Mario Ritter, Jr. was the editor.

shipment –n. a load of goods that are being sent to a customer, store, etc.

unit –n. a single thing, person, or group that is a part of something larger

conveyor belt –n. a mechanical apparatus for moving articles or bulk material from place to place

automate –v. to run or operate something, such as a factory or system, by using machines, computers, etc., instead of people to do the work

assembly line –n. an arrangement for assembling a product mechanically in which work passes from one operation to the next in a direct line until the product is finished