Update Required To play the media you will need to either update your browser to a recent version or update your Flash plugin.
By Bryan Lynn
19 December, 2016


An American company says it has developed the world's first true jetpack for personal flight.

California-based JetPack Aviation recently demonstrated its flying device to the public. It looks simple enough that almost anyone could use it to fly around.

The company's JB-10 flying machine is built like a backpack. It looks similar to the bags people use to carry anything from food to books on their back.

Jetpack Aviation's device is powered by two jet engines. The engines can operate on either airplane fuel or automobile diesel fuel.

The company says its personal flight vehicle has performed more than 400 test flights with no major problems. It says the jetpacks are still being developed and improved. The company recently launched a crowdfunding campaign online - with a $1 million goal - to raise money for more research and testing.

JetPack Aviation's chief executive officer, David Mayman, says developments in technology over the past 10 years have finally made the jetpack a reality.

"Ten years ago, the sensors weren't available, and iPhones and smartphones have sort of led the way with sensors." 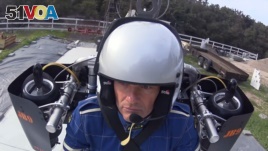 Mayman says these sensors are used to measure speed and movements. In the past, he adds, this kind of equipment could cost up to $100,000. Now it costs less than one dollar.

Lower costs and improvements in turbine technology have made it possible for the company to develop several other devices.

Another version of the jetpack, the JB-11, will be even more powerful. Mayman predicts this model will be used by first responders or the military during search and rescue operations.

"That's where JB-11 comes in, that's for moving somebody. It produces more power, it's more automated. And that enables one of their guys that's in trouble to get out very quickly."

The public demonstration of the JB-10 clearly showed the jetpack giving its passenger a smooth takeoff and landing. The equipment also appeared easy to operate and the device provided a stable test flight.

But the chance to own this futuristic flyer comes at a very high price. The JB-10 device is currently listed at $250,000.

In addition to its jetpacks, the company is also working on a quick-deploying parachute, as well as a personal flying vehicle.

George Putic reported this story for VOANews. Bryan Lynn adapted it for Learning English. was the editor.

What do you think about personal flying devices? Would you be willing to try one out? Write to us in the Comments section, and visit 51VOA.COM.

jetpack – n. device worn on a person's back that uses fuel or water to push them into the air

backpack – n. a bag worn on the back and used to carry things

crowdfunding – n. getting a large number of people to give small amounts of money to finance a business project or cause

enable – v. to make able to do something

stable – adj. in a good, steady state not likely to change