How Do Islamic State Militants Finance Their Operations?

Update Required To play the media you will need to either update your browser to a recent version or update your Flash plugin.
By George Grow
19 September, 2014

This week, the United States Congress approved part of President Barack Obama's plan to defeat Islamic State militants. The Senate voted Thursday to equip and train moderate Syrian rebels to fight the militant group. The measure was tied to a bill that will guarantee money to pay for U.S. government operations into December.

The vote came a day after the House of Representatives agreed to help the Syrian rebels against the Islamic State, also known as ISIL or ISIS.

The measure represents the only action U.S. lawmakers are likely to take before congressional elections in November. Florida Senator Bill Nelson is a member of Mr. Obama's Democratic Party. He compared the effort against the militants to fighting a wild animal. 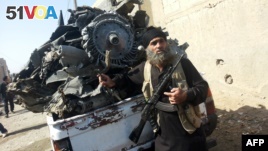 A jihadist stands next to the wreckage of a Syrian government aircraft shot down by militants of the Islamic State (IS) group over the Syrian town of Raqa on September 16, 2014. (AFP PHOTO/RMC/STR)

"When it comes to Syria -- and that's where the head of the ISIS snake is -- if you're going to kill the snake, you have to go to where the head is and chop it off."

The Islamic State has seized parts of Syria and Iraq. The Wall Street Journal newspaper says more than eight million people live in areas under the group's control.

How do the Islamic State militants get money to support their operations? Observers say some money comes from kidnapping, human trafficking, and the secret movement of goods across borders. Other financing reportedly comes as a result of threats made to local officials and businesses.

But most of the money comes from sales of oil, often to secret buyers. U.S. intelligence officials and observers say the militant group earns at least one million dollars a day from such sales.

Howard Shatz is with the RAND Corporation, a public policy group. He has studied the Islamic State. In his opinion, the group is "operating as a state, but it is a criminal state."

Islamists set their sights on the area's oil industry years ago. Mr. Shatz says they made threats to employees at the Beiji oil refinery in northern Iraq. They reportedly collected about two billion dollars from the employees between 2006 and 2009.

The United States is using air strikes and political pressure in hopes of stopping the oil sales. In Washington, a State Department official told reporters earlier this month that, "we believe that oil smuggled out by trucks through the Jordanian and Turkish borders is a serious problem." He added that "both those countries have pledged to do all they can to stop it."

Observers say recent videos of the Islamic State executing hostages have more than propaganda value. They say the images also serve as ransom notes for other kidnap victims.

The United States and Britain have repeatedly said they do not make payments for the release of their citizens. But some countries do. Last month, CBS News reported that a European company "paid a $70,000 ransom for a kidnapped employee."

This story was reported by correspondents Mohamed Zaid Mestou and Carol Guensburg. George Grow wrote it for Learning English. Mario Ritter edited it.

defeat – v. to cause to lose in battle or struggle

rebels – n. people who oppose or fight against the government of their country

wild – adj. living and growing in natural conditions and not organized or supervised by humans; uncontrolled

newspaper – n. a publication that reports about recent events

oil – n. a thick liquid that does not mix with water and that burns easily; a black liquid taken from the ground and used as fuel