Update Required To play the media you will need to either update your browser to a recent version or update your Flash plugin.
By Bryan Lynn
29 September, 2016


The United States Congress has voted to overrule a presidential veto of a bill supported by families of victims of the September 11, 2001 terrorist attacks.

The bill would let the families take legal action against Saudi Arabia for the attacks.

Both houses of congress voted Wednesday to reject President Barack of Terrorism Act.

The House of Representatives voted 348 to 77 to overrule the veto. In the Senate, the vote was 97 to one. A two-thirds majority is required to cancel the president's action. It was the first time in Obama's presidency that Congress has overturned one of his vetoes. 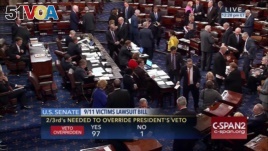 This frame grab from video provided by C-SPAN2, shows the floor of the Senate on Capitol Hill in Washington, Sept. 28, 2016, as the Senate acted decisively to override President Barack Obama's veto of Sept. 11 legislation.

Under the legislation, U.S. courts will have power to consider cases against foreign states that support terror acts carried out on U.S. territory. Claims can involve terrorism-related injuries, death or damages.

Fifteen of the 19 hijackers involved in the September 11 attacks were from Saudi Arabia.

Some relatives of the victims accuse Saudi Arabia of backing the attackers. They plan to bring cases against the Saudi government in U.S. courts. Saudi Arabia has long denied any part in the attacks.

Senator John Cornyn of Texas is a member of the Republican Party. He believes the legislation will send a message to international sponsors of terrorism.

"The Justice Against Sponsors of Terrorism Act will send a strong message to those who sponsor terrorist attacks on American soil, including foreign governments, [they] will answer to those victims and pay for the death and destruction they cause."

President Obama opposed the measure because it would limit the idea of sovereign immunity. Sovereign immunity is the legal policy that protects a government or its agencies from legal action.

The Obama administration has said the bill could endanger Americans working overseas.

New York Senator Chuck Schumer, a member of the Democratic Party, said he favored the bill, to finally give terrorist victims a chance at justice.

"The victims of 9/11 and other terrorist attacks have suffered such pain and heartache. But they certainly should not be denied justice."

The president told CNN television he thought the congressional action was "basically a political vote."

"Sometimes you have to do what's hard. And, frankly, I wish Congress here had done what's hard."

The director of the Central Intelligence Agency, John Brennan, said he thinks the bill will have "grave implications" for U.S. national security.

By failing to support the sovereign immunity standard for other countries, "we place our own nation's officials in danger," he said.

Brennan added that the bill could also make the Saudi government less willing to cooperate with the United States in anti-terrorism efforts.

Bryan Lynn wrote this story for VOA Learning English. His report was based on stories from VOA's Michael Bowman, the Associated Press and Reuters. George Grow was the editor.

sovereign immunity – n. the idea that a government is protected from legal action without its consent or acceptance

overrule – v. to rule against something or someone

sponsor – n. a person who takes the responsibility for someone else or something