US Congress Proposes Law to Give Citizenship to Millions

Update Required To play the media you will need to either update your browser to a recent version or update your Flash plugin.
By Jonathan Evans
22 February 2021


Democratic Party lawmakers in the United States Congress introduced immigration legislation last Thursday. The proposed law would create an eight-year path to citizenship for millions of undocumented immigrants in the United States. The legislation would also provide a faster path to citizenship for those brought to the country illegally as children.

What does the bill say?

Under the bill, immigrants who are not legally in the country can apply to become legal if they were in the United States on or before January 1, 2021. They must pay all required costs and, in most cases, must not have a criminal record. 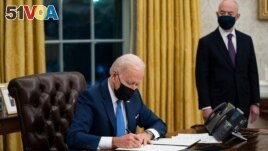 FILE - Secretary of Homeland Security Alejandro Mayorkas looks on as President Joe Biden signs an executive order on immigration, in the Oval Office of the White House, Feb. 2, 2021, in Washington.

There are special requirements for Temporary Protected Status holders, agricultural workers and those who arrived in the United States as children. Such children are known as Dreamers.

Hassan Ahmad is an immigration lawyer in the state of Virginia. He told VOA, "Having a criminal record or certain types of crimes on your record, or if you're a national security concern...would serve to prevent you...from getting relief under the bill."

The first step for applicants would be to secure lawful prospective immigrant status, or LPI. That is a way to have legal permanent residence in the United States. LPI status would be effective for six years.

Someone with LPI status could legally work and travel outside the U.S. and be lawfully admitted back into the country. Those going through the LPI process would be protected from being expelled from the country while the government is deciding their applications.

Those living temporarily in the United States or visiting the country with a visa would not be covered under the bill.

Which groups do not have to apply for LPI?

Those who can be or already are a part of the Deferred Action for Childhood Arrivals program will be able to apply directly for a green card. Other groups that may apply directly include Temporary Protected Status holders and those who have been agricultural workers for at least five years. These groups must then wait five years to be eligible for U.S. citizenship.

The bill calls for ending the three- and 10-year bans on people who lived in the United States illegally and then left.

The United States is also preparing to admit up to 125,000 refugees each year beginning in October. That is an increase from a 15,000-refugee limit at the end of the administration of former President Donald Trump. The announcement could change the lives of people like Abdirizak Noor Ibrahim.

Ibrahim is originally from Somalia. He left the country in 2004 and became a refugee in Nairobi, Kenya. Ibrahim and his family were approved to travel to the U.S. for resettlement in early 2017. However, then President Trump signed orders restricting travel from several countries including Somalia.

Ibrahim told VOA that he felt bad hearing about the ban. "But now, I am so hopeful since there is a change of administrations, I will be accepted and taken to the country," he said.

The president decides the upper limit of admitted refugees in October and sends the plans to Congress.

Yael Schacher is with Refugee International. She said over 35,000 refugees had been approved by United States Citizenship and Immigration Services as of December 2020. The U.S. State Department says about 11,814 refugees arrived in the United States in 2020.

Schacher said, "People who are resettled in the United States already, who came as refugees, have the ability to apply to have their family members to resettle as refugees, as well."

Supporters of Trump's immigration plan warn against undoing policies they consider important to America's safety. Lora Ries is a researcher at The Heritage Foundation, a conservative research group. She said there was a study of the program for security investigations of refugees at the beginning of the Trump administration. She said that policy should be repeated by future administrations.

"It should not be thrown out [by the new administration] just because Trump's name was attached to it," she told VOA.

apply –v. to formally ask for a service, documentation or status usually in writing

type –n. a particular king or group of things or people

relief –n. (legal) help that is provided for by law or by a court

prospective –adj. likely to become something specified in the future

status –n. the official position of a person under the law of a country

residence –n. (legal) legal permission to live in a country

eligible –adj. able to do or receive something