Update Required To play the media you will need to either update your browser to a recent version or update your Flash plugin.
By VOA
15 May, 2015


United States officials say the Defense Department is considering sending military ships and aircraft to test Chinese claims in the South China Sea. Officials say the U.S. deployment would forcefully demonstrate the right of shipping to move freely through the waterway. The move would be a direct challenge to China and its efforts to manufacture islands in the disputed waters.

"We claim the right of innocent passage in such areas and we exercise that right regularly, both in the South China Sea and globally."

Those are the words of the U.S. Assistant Secretary of Defense for Asian and Pacific Security Affairs, David Shear. He told a Senate hearing that, "We are going to continue exercising that right, both on the surface of the waters and in the air."

A U.S. Defense Department spokesman says the "key point" is that the waterways and air above the Spratley Islands are international. Colonel Steve Warren adds that the U.S. Navy "routinely" inspects the area. In his words, "International law does not recognize man-made islands as an extension of the mainland, and in this case, nor do we."

Satellite images have documented China's development of four coral reefs since President Xi Jinping took office in 2012. The work is taking place in waters where China and its neighbors have competing territorial claims. The development has included structures from shipping piers to landing areas for helicopters. U.S. State Department officials have repeatedly asked China to stop the work. 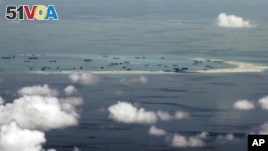 This photo, taken on May 11, 2015, through a window of a military plane shows China's apparent reclamation of Mischief Reef in the Spratly Islands in the South China Sea. (Ritchie B. Tongo/Pool Photo via AP)

Assistant Secretary of State Daniel Russel prepared a written statement for the Senate Foreign Relations Committee. He wrote that a U.S. presence is needed in the South China Sea to ensure everyone with an interest in the area follows international law. In his words, "No matter how much sand you pile on a reef...you can't manufacture sovereignty."

The South China Sea is one of the busiest areas for shipping in the world. U.S. interests are directly affected if China were to enforce control over the area.

Mr. Russel told lawmakers that the United States must use, in his words, "all instruments of national power" to push back on what he called "problematic behavior."

David Shear told U.S. lawmakers that, at the current rate, Chinese crews will complete work on an airfield on one of the reefs in 2017 or 2018. Some lawmakers expressed concern that what China is building could be used to enforce control of the sea. They said U.S. efforts to stop the work might be too little, too late.

Mr. Shear added that the United States will continue to have a stronger presence in the area through the deployment of military aircraft. He also said the military plans to send four new battle ships to Singapore by 2020, and an additional submarine to Guam.

A U.S. official says Defense Secretary Ashton Carter wants to explore other ideas. They include sending U.S. aircraft and ships within 22 kilometers of the reefs that China has been developing. "The Wall Street Journal" newspaper and Reuters reported the comments.

challenge – n. a difficult problem or test; an invitation to compete

coral reefs – n. hard substances formed in the sea by the remains of small organisms

sovereignty – adj. self-rule; the right to govern oneself; self-governance