Update Required To play the media you will need to either update your browser to a recent version or update your Flash plugin.
By VOA
05 May, 2015


This week could decide what happens to a bipartisan bill in the United States Senate. If approved, the bill would give the U.S. Congress the right to examine and vote on any final nuclear agreement with Iran. Democratic and Republican senators have expressed support for the proposal.

The U.S. Senate can either vote on the bill as is or permit amendments, making additional demands on Iran. But changes would lead to a presidential veto and could stop the legislative effort.

If approved, the bill would delay an easing of U.S. sanctions on Iran for 30 days. Congress would have 30 days to study a final nuclear agreement with Iran before the restrictions could be lifted. The bill has the support of Senate Majority Leader Mitch McConnell. 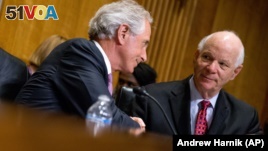 "These sanctions are a big reason why America was able to even bring Iran to the (negotiating) table in the first place. We should not be giving up that leverage now without the American people, through the members of Congress they elect, having a chance to weigh in."

The Senate Majority leader belongs to the Republican Party. But some Republicans in the Senate are putting Mr. McConnell in a very difficult position. They are doing everything in their power to force votes on amendments on what critics say are side issues to the nuclear talks.

One of the amendments would require Iran to recognize the right of Israel to exist. Republican Senator Tom Cotton is not apologetic for supporting what have been called "poison pill" amendments.

The bipartisan bill is the work of Republican Senator Bob Corker and Democratic Senator Ben Cardin. Senator Cardin has appealed for restraint.

"This is an extremely important issue. It has got to rise above our individual desires so that, collectively, we can achieve something for the American people."

President Barack Obama says the United States should not miss the chance to limit Iran's nuclear program in a way that can be confirmed. Josh Earnest is the president's spokesman.

"We do not anticipate that these nuclear negotiations will resolve the long list of concerns that we have with Iranian behavior. We know that it would be even more difficult to resolve our concerns about Iran's nuclear, Iran's destabilizing activities, if Iran had a nuclear weapon."

Senator McConnell can either permit votes on amendments or move to end debate and bring the original bill up for a final vote. On this issue, the majority leader's support for a full debate in the Senate is in conflict with his desire to see the measure signed into law.

Iran has been talking about its nuclear program with six other countries: the United States, Britain, China, France, Germany and Russia. They have set June 30 as their date for reaching a final nuclear agreement.

This report was based on a story from VOA's Michael Bowman in Washington. George Grow adapted it for Learning English. Ashley Thompson was the editor.

sanction(s) – n. a measure designed to force a country to obey international laws

restraint – n. a way to limit or control something

spokesman – n. someone speaking for someone or something else; a representative