Update Required To play the media you will need to either update your browser to a recent version or update your Flash plugin.
By VOA
02 February, 2015


The New York Times newspaper says the administration of President Barack Obama is considering sending weapons to Ukraine. The aim would be to help the country fight Russian-supported rebels.

The newspaper reports that unnamed officials say top government officials are willing to consider sending military weapons and equipment to Ukrainian forces. The officials include Secretary of State John Kerry, Chairman of the Joint Chiefs of Staff General Martin Dempsey and the president's national security adviser. 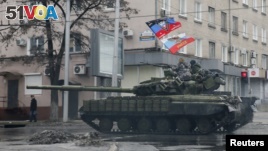 The Times article reports that Secretary of State John Kerry plans to visit Kyiv on Thursday. The newspaper also says that an independent report being released Monday urges the U.S. to send $3 billion in defensive arms and equipment. The proposal by eight former American officials is being debated.

In December, Mr. Obama signed legislation approving $350 million in military and non-military aid to Ukraine. On Sunday, President Obama said Russia has not shown that it is in their interest to solve the crisis.

The Ukraine conflict has killed more than 5,100 people since it started last April after Russia seized the Crimean Peninsula.

President Obama is to release his yearly plan for U.S. government spending on Monday. He is expected to call for $4 trillion in spending.

With the economy showing signs of improvement, the Obama administration believes the U.S. should increase spending on child care, education and health care.

The president's budget is expected to cancel the spending cuts of recent years that have lowered government spending on many projects.

President Obama, a Democrat, will face a Congress that is now fully controlled by Republicans. So experts expect disputes about how government money will be spent.

Boko Haram attack in northeast Nigeria is turned back

The Nigerian military says it has stopped another attempt by fighters belonging to the terrorist group Boko Haram to seize the important city of Maiduguri.

The attack on Sunday was the second in a week by the group. Boko Haram fighters attacked the city from two main roads. A VOA reporter said hundreds of civilians armed with rifles and other weapons ran toward the fighting to help soldiers stop the militants.

The attack happened two weeks before the country's planned elections.

Experts believe Boko Haram will try again to seize Maiduguri before the election.

Bomb blast in Bangkok meant to "threaten and create chaos"

Police in Bangkok announced they have increased security in public places after two explosions in a large shopping center in the Thai capital on Sunday. Two people were hurt. 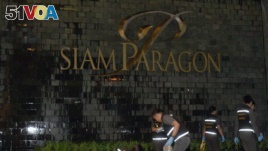 The national police chief says the bombs, in his words, "were not designed to injure or kill anyone. They were intended to threaten and create chaos."

The prime minister told reporters on Monday the bombings show that martial law must remain in effect because, in his words, "there are bad people disrupting the peace."

No group has claimed responsibility for the incident.

And the biggest yearly sporting event in the United States took place Sunday.

The National Football League championship game is known as the Super Bowl.

The New England Patriots defeated the Seattle Seahawks in the game. It was the first time the Patriots won the championship in 10 years.

The Super Bowl is the most-watched television program of the year in the US. The National Retail Federation estimated 184 million Americans would watch the game.

consider v. to give thought to; to think about carefully

proposal- n. a present or offer for consideration

disputes- n. a disagreement or argument

martial- adj. of or relating to war, soldiers or the military