US Continues to Lead in Weapons Exports

Update Required To play the media you will need to either update your browser to a recent version or update your Flash plugin.
By Christopher Jones-Cruise
26 June, 2016


The United States continues to export more arms than any other country in the world, according to a defense advisory service. 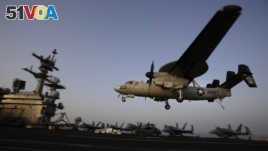 In this Aug. 10, 2014, photo, an aircraft lands after missions targeting the Islamic State group in Iraq from the deck of the U.S. Navy aircraft carrier USS George H.W. Bush in the Persian Gulf.

The report shows the international defense market increased by $6.6 billion in 2015 to $65 billion.

The U.S. exported nearly $23 billion in weapons to other countries, especially to the Middle East. That represents an increase of $10 billion since 2009, the report says.

"The global defense trade market has never seen an increase as large as the one we saw between 2014 and 2015," says Ben Moores, who works for IHS Jane's. He adds that "2015 was a record-breaking year."

Weapons sales from French companies last year were more than two times the total in 2014 -- increasing from $8 billion to $18 billion. The report said if that rate of increase continues, France will pass Russia as the second-largest weapons exporter by 2018.

The increase in arms sales last year was mainly the result of increased demand from Middle Eastern countries. They got about $21.6 billion worth of weapons, including $8.8 billion from the United States.

Saudi Arabia and the United Arab Emirates bought about half of the weapons sold to Middle Eastern countries. They got about 17.5 percent of all global defense imports, or $11.4 billion.

Iran is growing stronger because Western nations have eased restrictions as part of an agreement Iran signed to limit its nuclear activities. Iran is buying new equipment for its air force, and is likely to increase trade with Russia. The IHS report says in years to come, Iran could spend between $40 billion and $60 billion replacing its older airplanes.

Egypt has sharply increased the amount of money it spends on defense. It spent up to $2.3 billion last year. It is now the world's fourth-largest weapons importer.

Countries around the South China Sea have increased their defense spending by 71 percent since 2009 as they try to limit China's influence in the area.

The report predicts the weapons trade will continue to increase worldwide. It says arms spending will total about $69 billion this year.

Joshua Fatzick reported this story for VOANews. Christopher Jones-Cruise adapted it for Learning English. George Grow was the editor.