Is US Losing an Important Part in the War on Terrorism?

Update Required To play the media you will need to either update your browser to a recent version or update your Flash plugin.
By Christopher Jones-Cruise
16 September, 2017


Sixteen years after the United States launched its war on terrorism, there are concerns that parts of the war have not succeeded.

Some experts and U.S. government officials believe the country may be losing what they call "the battle of ideas."

Michael McCaul is a member of the House of Representatives and head of its Homeland Security Committee.

McCaul notes that the U.S. military has used drone aircraft to kill jihadists and others sharply opposed to the West. 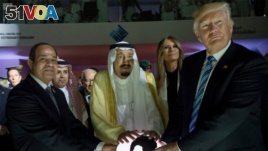 "We have been able to stop and prevent a lot of (terror) plots from happening in the United States," he says. But he adds that "drone strikes alone can't win a war of ideology."

Current and former U.S. officials say the country has tried hard to fight propaganda that fuels groups like al-Qaida and the Islamic State of Iraq and Syria, or ISIS. But they admit the results of the efforts have not been good.

White House homeland security adviser Tom Bossert says he is "alarmed at the spreading of the ideology." He spoke at a security conference earlier this month in Washington, D.C.

"We've got upwards of 17 or 18 nation states that might be failed, or viewed as close to failing, and they have a strong presence of either ISIS or al-Qaida or other groups," Bossert said. "That is a troubling development."

Some U.S. officials once believed the problems would end with a military victory against Islamic State fighters in the Middle East. They believed that after the group's self-declared caliphate collapsed, so would the appeal of the group.

But experts say the Islamic State's continuing losses on the battlefield have failed to end the appeal of jihadist teachings.

In July, Dan Coats, the U.S. Director of National Intelligence, told a group that "we're putting a stake in the heart of ISIS." He compared the effort to killing an octopus, "with all the tentacles moving out to different places."

Since then, the government has been empowering partner organizations to help beat back the Islamic State message. Progress has been slow, but some former officials say President Donald Trump needs to give these efforts more time.

Joshua Geltzer is a former counterterrorism expert at the National Security Council. He said "it seems to me there's actually been a stepping back, in particular, from some of the structures that were built" to fight terrorist ideology.

Geltzer and other former officials have said they are worried about the Trump administration's plans to cut money for such programs.

But some current and former officials say there may be limits to what the U.S. government can do.

"Truly altering the environment that gives rise to the terrorist threat we face, that's a much more formidable task," says Nicholas Rasmussen, director of the National Counterterrorism Center. He added "More resources are required, more time is required and more patience is required."

Some observers say there are signs that the U.S. may not even know what it wants to do.

Jasmine El-Gamal was a cultural adviser for the U.S. Army's 82nd Airborne Division in the early days of Operation Iraqi Freedom. She now works for the Atlantic Council research center in Washington.

She notes "we have a very militarized view of what this battle is. When we say ‘countering violent extremism' it's really counterterrorism. It's really that we use bombs, we use drones, we use armies."

A report by New America's International Security program noted that "there seems to be some conceptual confusion in the U.S. government about what ‘countering violent extremism' programs are attempting to do."

The report says "turning many millions of Muslims around the world away from radical ideas ... seems both a nebulous mission and one that may not be achievable."

Some experts believe American allies in the Middle East could be doing much more to help fight extremists' ideology.

New America Fellow Nadia Oweidat said "most Arab states are not interested in uprooting the tree, but just taking the poisonous fruits when convenient."

Many Arab states have laws against blasphemy – the act of insulting God or religion.

Oweidat notes, "As long as there are blasphemy laws, you don't even dream about countering terrorism, because the very people who can take on these ideas from within -- who know the Quran by heart, people who went to school all their lives in the Middle East" -- are those who would be identified as blasphemous."

caliphate – n. the government of a caliph, a Muslim political and religious leader

tentacle – n. one of the long arms that stick out from an octopus

confusion – n. the feeling you have when you do not understand what is happening

convenient – adj. letting you do something easily or without trouble