Update Required To play the media you will need to either update your browser to a recent version or update your Flash plugin.
By Hai Do
09 July 2020


The U.S. Supreme Court ruled Thursday that a New York government lawyer can get President Donald Trump's financial records. The court also blocked the House of Representatives from getting the documents – for now.

Unlike other recent presidents, Trump has not released his financial documents, including tax returns. The forms could provide information on his wealth and the activities of his family company, the Trump Organization.

The court ruling does not guarantee that the public will be able to see the records.

Trump is seeking reelection later this year. On Twitter, the president immediately denounced the ruling as "a political prosecution."

One of the cases the Supreme Court ruled on Thursday was Trump versus Vance. Cyrus R. Vance Jr. is the District Attorney of New York County.

In that ruling, Chief Justice John Roberts wrote that in the U.S. judicial system, "the public has a right to everyman's evidence." He added, "no citizen, not even the President," could refuse "to produce evidence when called upon in a criminal proceeding."

The two women, Stormy Daniels and Karen McDougal, said they had sexual relations with Trump. Trump's personal lawyer at the time, Michael Cohen, confirmed the payments but Trump has denied the relationships.

As part of a criminal investigation, Vance asked Trump's accounting firm Mazars LLP for financial records, including his tax documents. The documents were to be given to a grand jury in New York City.

Trump's lawyers argued that under the U.S. Constitution he cannot be subjected to criminal investigation while serving as president. They noted a Justice Department guidance that says a sitting president cannot be indicted or prosecuted.

During a lower court hearing, Trump's lawyer claimed that officials could not investigate Trump even if he shot someone on New York's Fifth Avenue.

By a 7-2 vote, the Supreme Court ruled that Mazars could be ordered to provide financial records to a grand jury as part of a criminal investigation. Because the grand jury process is secret, Trump's records would not be known to the public.

Vance, a Democrat, cheered the Supreme Court's ruling. He said, "This is a tremendous victory for our nation's system of justice and its founding principle that no one - not even a president - is above the law." 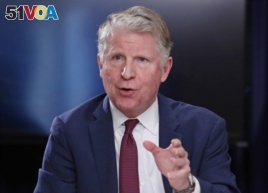 FILE - Manhattan District Attorney Cyrus R. Vance, Jr., responds to a question during a news conference in New York, May 10, 2018.

Mazars was also part of the second Supreme Court case. It involved three committees in the Democratic-controlled House of Representatives.

The committees asked Mazars and two bankers, Deutsche Bank and Capital One, to provide financial information from the president, his family and his related businesses.

The House committees argued they have the power under the Constitution to issue subpoenas to help it in carrying out legislative responsibilities.

The president's lawyers argued that the House's request was not for legislative reasons. They said the aim was to uncover personal information on the president and his family. And they questioned whether the subpoenas were outside the House's Constitutional powers.

By the same 7-2 vote, the court chose not to rule on the House's subpoena powers. That sends the dispute over Trump's financial information back to lower courts.

Writing for the majority, Chief Justice Roberts wrote, "Congressional subpoenas for the President's personal information implicate weighty concerns regarding the separation of powers. Neither side, however, identifies an approach that accounts for these concerns."

After the rulings, House Speaker Nancy Pelosi said, "I hear he's tweeting one thing, and other people are saying another. But whatever it is, it's not good news for the president of the United States."

The Democratic leader said in a statement that the House would continue "to uncover the truth" and "press our case in the lower courts."

prosecution - n. the act or process of holding a trial against a person accused of a crime to see if that person is guilty

indict - v. to formally declare that someone should be put on trial for a crime

subpoena - n. a written order that commands someone to appear in court or in front of Congress

implicate - v. to show that something is closely connected

approach - n. a path that leads to something