Update Required To play the media you will need to either update your browser to a recent version or update your Flash plugin.
By Susan Shand
14 July 2021


The number of COVID-19 cases in the United States is increasing again after months of falling numbers.

The number of new cases a day has increased by 100 percent over the past three weeks. Experts say the increase has been caused by the fast-spreading delta variant, low vaccination rates and recent holiday gatherings in the country. 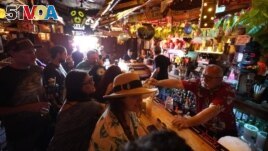 In this Wednesday, July 7, 2021, file photo, patrons enjoy cold tropical cocktails in the tiny interior of the Tiki-Ti bar as it reopens on Sunset Boulevard in Los Angeles.(AP Photo/Damian Dovarganes, File)

Confirmed infections rose to an average of about 23,600 a day on July 12, up from 11,300 on June 23. Those numbers come from reports from Johns Hopkins University. Every state except two — Maine and South Dakota — reported that case numbers have gone up over the past two weeks.

"It is certainly no coincidence that we are looking at exactly the time that we would expect cases to be occurring after the July 4th weekend," said Dr. Bill Powderly. He is the co-director of the infectious-disease division at Washington University's School of Medicine in St. Louis, Missouri. July 4th – or Independence Day -- is a major American holiday.

At the same time, parts of the country are dealing with strong anti-vaccine beliefs. And the highly contagious Delta variant of the coronavirus, which was first discovered in India, is making an ever-larger share of infections in the United States.

Nationally, 55.6 percent of all Americans have received at least one COVID-19 shot, says the Centers for Disease Control and Prevention.

Even with the latest increases, case numbers in the U.S. are still much lower than they were earlier this year. They reached a high of 250,000 cases a day in January.

The number of people dying from COVID-19 each day is also much lower than six months ago. The country is now reporting fewer than 260 deaths per day on average. Over the winter, there were more than 3,400 COVID-related deaths being reported each day. The large drop shows how effectively the vaccine can prevent serious illness and death in those who become infected.

Still, health officials in places such as Los Angeles County in California and St. Louis, Missouri, are asking even vaccinated people to return to wearing face coverings in public. Officials in Chicago, Illinois, announced Tuesday that unvaccinated visitors from Missouri and Arkansas must either quarantine for 10 days or get a test showing they do not have COVID-19.

The state of Mississippi has the lowest vaccination rate in the country. The state's Health Department began blocking posts about COVID-19 on its Facebook page because of a "rise of misinformation" about the virus and the vaccine.

Mississippi officials are also asking people 65 and older, and those with serious health problems, to stay away from large indoor gatherings. The request comes after a 150-percent rise in hospitalizations over the past three weeks.

Louisiana also has one of the nation's lowest vaccination rates. Officials in the city of New Orleans said Tuesday they are likely to extend until autumn the restrictions in place to fight the virus. They say those planning to attend large indoor gatherings must be vaccinated or have proof they are not infected. State health officials said cases of the coronavirus are increasing, largely among non-vaccinated people.

In many states, however, officials are not willing to accept the possibility that restrictions may be needed again, even if case numbers are rising.

"Alabama is OPEN for business. Vaccines are readily available, and I encourage folks to get one," said the state's Republican Governor Kay Ivey. "The state of emergency and health orders have expired. We are moving forward."

Dr. James Lawler is a leader of the Global Center for Health Security at the University of Nebraska Medical Center in Omaha. He said bringing back face coverings and limiting gatherings would help. But he agreed that most of the places seeing higher rates of the virus "are exactly the areas of the country that don't want to do any of those things."

He said that areas around the world where the delta variant has become the most common form of the virus have reported hospitals full of younger adults.

"That's what the critical care doctors describe and that's what's coming to the U.S.," Lawler said.

He added, "I think people have no clue what's about to hit us."

While the U.S. government has seen success in vaccinating older Americans, young adults have shown less urgency to get the shots.

contagious - adj. able to be passed from one person or animal to another by touching

quarantine - n. separating someone who has an infectious disease

expire - v. to no longer be valid after a period of time