Update Required To play the media you will need to either update your browser to a recent version or update your Flash plugin.
By Mary Gotschall
10 January, 2016


The U.S. made its first export of crude oil in four decades last Thursday.

The exports were banned in the mid-1970s. That ban was lifted a few weeks ago.

The Arab Oil Embargo began in 1973. Arab nations who produce oil dramatically limited their shipments to the U.S. This was done to punish the U.S. over its military support for Israel. 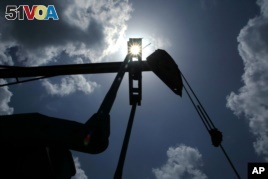 Oil is pumped from a well near Van, Texas. The U.S. made its first export of crude oil from Texas last Thursday.(AP)

The Arab cartel later expanded the embargo to other countries, and oil prices soared worldwide. By 1974, the price of oil had risen from $3 per barrel to nearly $12 globally. U.S. prices were much higher.

The embargo had many short- and long-term effects on global politics and the global economy.

The skyrocketing prices led to a drop in demand for oil. Countries looked to alternative energy sources such as natural gas, nuclear energy and coal, says the Gale Encyclopedia of U.S. Economic History.

Oil-producing nations outside the Middle East increased their production and relied more on domestic supply.

"The embargo set U.S. energy policy on a path that still guides us 40 years later," wrote Robert Rapier in an article on the website Oilprice.com. That website reports oil and energy news.

Every president since Nixon has made energy security a top priority, he continued. But each president has dealt with the problem in different ways.

President Barack Obama has looked for energy sources apart from imported oil, such as natural gas from wells in the U.S.

In addition, the U.S. produces 9.2 million barrels of oil per day, close to 10 percent of the world oil supply, according to the U.S. Energy Information Agency.

Oil prices are near an 11-year low, reports the Oil Price Information Service. U.S. oil now sells for around $37 per barrel. The Organization of Petroleum Exporting Countries (OPEC) is currently selling its oil for about $32 per barrel.

cargo – n. something that is carried from one place to another by boat, airplane, etc.decade – n. a period of 10 years

embargo – n. a government order that limits trade in some way

cartel – n. a group of businesses that agree to fix prices so they all will make more money