Update Required To play the media you will need to either update your browser to a recent version or update your Flash plugin.
By VOA
17 December, 2014


U.S. President Barack Obama announced a major change in U.S. relations with Cuba. He acted after that country's government released Alan Gross, an American held in prison there for five years.

President Obama announced increased economic and travel ties between the countries. The policy change ends more than 50 years of diplomatic isolation that began in the Cold War.

"Isolation has not worked. It's time for a new approach," Mr. Obama said. "I believe this contact will do more to empower the Cuban people."

President Raul Castro said, "The decision by President Barack Obama deserves respect and recognition by our people." He also called on the United States to end its economic blockade of Cuba. 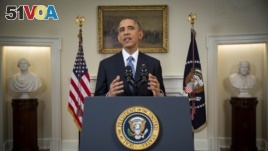 President Barack Obama announces a major shift in U.S. relations with Cuba, in the Cabinet Room of the White House in Washington, Dec. 17, 2014.

Alan Gross spoke soon after his arrival in Washington, D.C. Wednesday. He thanked those who worked for his release and said he was happy to be home.

Cuba and the United States say they plan to work on an agreement to open embassies in each other's capitals.

India observed a moment of silence Wednesday to remember the victims of the deadly Pakistani Taliban attack on a school in Pakistan, Tuesday. The attack in Peshawar killed at least 132 students and nine staff.

Indian Prime Minister Narendra Modi led Parliament and thousands of students across India in two minutes of silence to mourn the dead.

Sony Pictures said Wednesday it has canceled next week's Christmas Day release of "The Interview," a humor film about a plot to kill North Korean leader Kim Jong Un. Officials acted after a group of computer hackers threatened possible audiences.

The hacker group calls itself the Guardians of Peace. It released a statement Tuesday promising a "bitter fate" to those who see "The Interview."

The statement warned people to stay away from theaters that show the film.

In the film, actors Seth Rogen and James Franco play the part of television reporters who the U.S. asks to kill Kim Jong Un.

North Korea has called the film an act of terrorism, and had called for Sony to cancel the film.

isolation – n. : the state of being in a place or situation that is separate from others

mourn – v. to feel or show great sadness because someone has died

hacker – n. a person who secretly gets access to a computer system in order to get information or cause damage