US Defeats Iran in World Cup Soccer, Continues to Next Level of Competition

Update Required To play the media you will need to either update your browser to a recent version or update your Flash plugin.
By Dan Friedell
29 November 2022


The United States soccer team defeated Iran and will continue to the elimination stage of the World Cup in Qatar.

The team needed a win on Tuesday to continue in the competition. The U.S. will play the Netherlands on Saturday.

The Americans made up for a loss to Iran at the 1998 World Cup because of a first-half goal from Christian Pulisic. 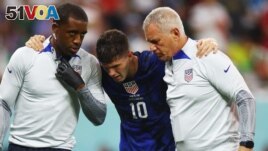 Christian Pulisic of the U.S. receives medical attention after colliding with Iran's Alireza Beiranvand after he scores their first goal REUTERS/Kai Pfaffenbach

The American team did not qualify for the World Cup in 2018 but this time finished second behind England in Group B. Iran needed only a tie to continue in the competition.

Pulisic was injured in a collision with the Iranian goalie just before the ball crossed the goal line. He stayed in the game after receiving medical help but did not come back after halftime.

Pulisic is a member of the Chelsea team in the English Premier League, Britain's top professional soccer group. It was his first World Cup goal.

In the second half, the Americans held off Iran's push. With minutes to play, Iran came close to scoring. The U.S. defender Walker Zimmerman cleared a loose ball in front of the net as Mehdi Taremi of Iran argued that he had been pulled down.

The U.S. team is the second youngest in the World Cup behind Ghana. Tim Weah said, "No one believed the U.S. could play good football." Weah is 22 and the son of George Weah, a former top soccer player and current president of Liberia.

Weah scored a goal in the U.S. team's opening tie against Wales and nearly scored on Tuesday. His goal was called back, however, as he was judged to be offside.

Iran's players hoped for a different result. The country has never gotten farther than the group stage.

"I hope that our fans and our people in Iran forgive us. I am just sorry," Taremi said.

elimination stage –n. a part of a tournament or competition in which the game winner continues and the loser is out of the competition

tie –n. a result of a game in which both sides have the same score

collision –n. a crash involving at least to objects