US Drops Case Against Yale for Racial Discrimination

Update Required To play the media you will need to either update your browser to a recent version or update your Flash plugin.
By Dan Friedell
06 February 2021


The U.S. Department of Justice withdrew a lawsuit last week against Yale University over how it accepts students. In October 2020, the department accused the school in New Haven, Connecticut of making it too hard for Asian-American and white American students to be accepted.

The lawsuit said Yale uses race as a "determinative factor" in hundreds of admissions decisions each year. That term means race was considered a main reason for accepting or denying students.

The case resulted from a legal action brought in 2016 by the Asian American Coalition for Education. The organization condemned the Justice Department's sudden move on Wednesday, calling the dismissal "baseless."

Colleges and universities in the U.S. say they make an effort to seek out and admit qualified students from different backgrounds. The decisions are not based on grades and test scores alone.

That means they consider where a student is from, what kind of high school they attended and what kind of experiences they had in life before college. These considerations include the student's race and citizenship.

In the past, many American universities placed limits on the number of racial or religious minorities they would accept. Some had policies barring such groups.

Many schools also have a system that favors applicants whose parents attended the school. These students were known as "legacies." Critics say these policies help only rich, white people.

Since the 1950s, the U.S. government has asked universities to end unfair admissions policies and to consider students based on merit.

However, although policies have changed and many legal cases have been brought, change has been slow. At famous colleges, like the Ivy League schools in the northeastern U.S., there is still a relatively low percentage of Black students. The Ivy League includes Harvard University in Massachusetts, Yale University in Connecticut and Princeton University in New Jersey.

Cases that have gone to the U.S. Supreme Court helped universities update how they make their admissions decisions. The policy that permits universities to give extra weight to the race of an applicant when making their decision is called affirmative action.

The U.S. Supreme Court has ruled several times that colleges can consider race as a way to accept students with different backgrounds. However, some groups of students have disputed affirmative action policies. They say famous universities are preventing qualified Asian-American and white students from being accepted.

For example, a lawsuit brought against Harvard in 2014 said outstanding Asian American students were being penalized because of their race. Last November, however, a court in Boston ruled that Harvard University was not breaking rules related to admissions.

After the ruling, Students for Fair Admissions, which brought the case, said it would appeal to the Supreme Court. "Our hope is not lost," said Edward Blum, the group's president. 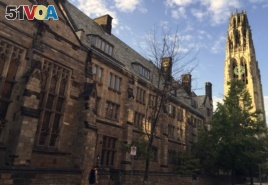 FILE - Harkness Tower on the campus of Yale University in New Haven, Conn., Sept. 9, 2016 photo. The Biden Justice Department says it is dismissing its discrimination lawsuit against Yale University.

In the Yale case, Asian American students said they were not being treated in a fair way. And, in a statement last August, the Department of Justice said Asian American and white students had "only one-tenth to one-fourth of the likelihood of admission" when compared to similar Black students.

Yale rejected this. The university's president said it would not change its admissions policies. With the recent ruling, it will not have to change. A spokeswoman called the Justice Department's decision "gratifying."

Swan Lee is a co-founder of the Asian American Coalition for Education. She was angry about the decision. "It's a setback in our fight against racial discrimination against Asian Americans in education," she said.

Some civil rights groups say the Department of Justice's recent decision was a good one. David Hinojosa is director of the Educational Opportunities Project at the Lawyers' Committee for Civil Rights Under Law.

He said the decision fits with past court decisions that said admissions decisions that consider race are legal. "Black students and other students of color who come from all walks of life can rest a little easier knowing our government is looking to lift them up, not divide and suppress," he said.

Blum said his organization believes the best chance for his group's lawsuit to find receptive judges is at the U.S. Supreme Court. The court is expected to decide soon if it will hear an appeal in the Harvard case.

"The challenge to race-based affirmative action in higher education will continue regardless of any change in the Department of Justice," Blum said.

Colleen Long and Michael Balsamo of The Associated Press wrote this story. Dan Friedell adapted it for Learning English. Mario Ritter, Jr. was the editor.

lawsuit- n. a process by which a court of law makes a decision to end a disagreement between people or organizations

merit- n. a good quality or feature that deserves to be praised

applicant –n. a person who is applying for a position or to attend a school, college or university

penalize- v. to be punished for something (whether it is fair or not)

receptive- adj. willing to listen to or accept ideas, suggestions

challenge –n. a difficult task or problem; something that is hard to do