US Eases Ban on Lethal Weapons to Vietnam

Update Required To play the media you will need to either update your browser to a recent version or update your Flash plugin.
By George Grow
03 October, 2014

The U.S. State Department announced the decision on Thursday. Earlier in the day, Secretary of State John Kerry met with Vietnam's Deputy Prime Minister and Foreign Minister, Pham Binh Minh, in Washington and told him about the decision.

State Department spokeswoman Jen Psaki said the United States still has concerns about human rights in Vietnam. She said arms sales to the country would be examined one case at a time. 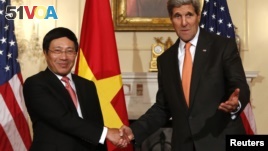 "Our security relationship remains under constant review. Clearly there's more work that needs to be done in areas like human rights, and that's one thing that the Secretary conveyed during the meeting and this is, of course, a partial lifting."

Vietnam is facing increasingly aggressive Chinese territorial claims to large parts of the South China Sea -- waters that Vietnam calls the East Sea. Experts believe the area has large amounts of oil, natural gas and minerals. The partial lifting of the ban permits the sale of equipment that will help Vietnam defend its waters and coast. The State Department says the decision was not aimed at China.

U.S. Senator John McCain welcomed the decision. But he called for improvements in Vietnam's human rights record. The Reuters news service reported his comments. Senator McCain is a former U.S. Navy pilot. He fought in the Vietnam War, was captured and held prisoner in Vietnam for more than five years.

Human Rights Watch immediately criticized the decision. The group has long protested what it believes is Vietnam's poor treatment of opposition leaders and ethnic and religious minorities.

Human Rights Watch spokesman John Sifton described Vietnam's record on political prisoners as "bad and getting worse." And he said many Christian groups in Vietnam are still unable to register with the government, and remain illegal. The Associated Press reported his comments.

The easing of the ban is the latest move in the slowly-improving ties between the United States and Vietnam. Relations were normalized in 1995, 20 years after the end of the war. Since then, trade between the countries has risen to more than $20 billion a year.

This story was reported by VOA correspondent William Gallo in Washington. George Grow wrote it for Learning English. Christopher Cruise was the editor.

ban – n. an official restriction; v. to not permit; to stop

weapons – n. things used to cause injury or to kill during an attack, fight or war

prisoner – n. someone jailed as punishment for a crime