US Education ‘Report Card’ Says Much Can Be Improved

Update Required To play the media you will need to either update your browser to a recent version or update your Flash plugin.
By Bryan Lynn
17 April, 2018


A new report on the performance of American students found little or no improvement over the past year in mathematics and reading skills.

The 2017 National Assessment of Educational Progress - also known as the Nation's Report Card - was released April 10. The report is based on tests of students across the United States. The Department of Education organized the testing.

Among the report's findings was that only about one-third of 8th grade students were considered proficient in reading and math. Generally, most eighth graders are 13 or 14 years old.

The Department of Education defines proficiency as "solid academic performance." It says students who reach this level have a good knowledge of the subject and can use their knowledge in real-world situations. These students are also able to use analytical skills related to the subject.

About 40 percent of 4th graders were found to be proficient in reading and math. The report found just 25 percent of 12th grade students had math proficiency, while 37 percent reached that level in reading.

Results of the latest Report Card were similar to other reports released in recent years. In a statement, U.S. Secretary of Education Betsy DeVos said the latest study shows that much can be done to improve the nation's education system. As she noted, "The Report Card is in, and the results are clear: We can and we must do better for America's students. Our nation's reading and math scores continue to stagnate."

DeVos said she was concerned the assessment found major differences between the highest and lowest performing students. These differences were widening, she said, although billions of dollars had been spent in an effort to reduce them.

DeVos praised the state of Florida for being "one bright spot" in the latest Report Card. She said Florida students showed "significant improvement" in 4th and 8th grade math, and 8th grade reading.

Carissa Miller is head of the Council of Chief State School Officers. She told the Associated Press the assessment shows much work needs to be done to prepare students at all levels for college, careers and life. "It is clear we as a country must do better by all of our students, especially our lowest-performing kids," she said.

How do US students rate internationally?

A leading measure of student performance worldwide is the Program for International Student Assessment (PISA). It is carried out by the Organization for Economic Cooperation and Development (OECD). The most recent study involved about 540,000 15-year-olds living in 72 nations and economies.

The test includes a mix of multiple-choice questions and some requiring original answers. Students are tested in different subject areas. The students also provide information about themselves, their home, school and learning experiences.

PISA studies are completed every three years. The latest one, in 2015, found that U.S. students performed below students living in other economically developed nations.

American students had an average test score of 497 in reading, which was just above the OECD average of 493. The U.S. score for math was 470, and 496 for science.

The country with the highest PISA scores overall was Singapore. Students there had average test scores of 535 in reading, 564 in math and 556 in science.

The next highest-scoring students were in Japan, Estonia, Taiwan, Finland, Macao and Canada. Australia, Britain, Germany, the Netherlands and Switzerland had scores averaging in the low 500s in the three subject areas. 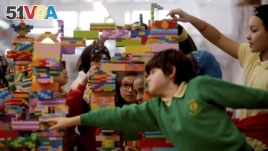 Children from the local Globe Primary School help build a Lego sculpture during a photocall to promote the exhibition "The Century of the Child: Nordic Design for Children 1900 to Today" at the V&A Museum of Childhood in east London, Monday, March 19, 201

PISA says it produces the reports to provide governments and educators around the world with information to help make decisions about education policies. However, planning and carrying out the tests is a complex process. Some educators and school activists have criticized PISA's testing and reporting methods.

Critics have pointed out that in some countries – for example, China – PISA testing is only done in a few cities, such as Beijing and Shanghai. They argue this ignores China's rural areas - where the majority of students live and where other studies have shown lower performance levels.

PISA has also been accused of lacking neutrality. Critics say the findings generally support the economic role of public schools because it is part of the OECD.

In 2014, a group of educators wrote an open letter to PISA director Andreas Schleicher to express their concerns about the PISA system. Among the concerns were that PISA testing had led to an increase in standardized testing across the United States. This led to ratings of student and teacher performance from methods "widely known to be imperfect," the group wrote.

Miyako Ikeda is a senior analyst of PISA data. She says the organization completes careful research and experiments with trial questions in an effort to create the best possible testing.

Ikeda says there is also intense cooperation between nations taking part and the OECD in an effort to collect the best sample data. "It is a very collaborative process between the participating countries in the OECD, to make sure that what we observe in the scores is not due to technical issues," she said.

She added that the main goal of PISA is to go past measuring only performance levels in different subjects. Instead, she said, tests are designed to also show a student's problem solving skills and readiness to use knowledge in real-world situations.

assessment – n. the act of making a judgement about something

academic – adj. of or related to a school

analytical – adj. of or relating to the careful study of something

stagnate – v. to stay the same and not grow or develop

original – adj. independent; not a copy

multiple – adj. involving more than one

score – n. the number of points someone gets in a test or game

sample – n. a representative part of something

collaborative – adj. involving two or more people working together for a set purpose