Update Required To play the media you will need to either update your browser to a recent version or update your Flash plugin.
By Bryan Lynn
20 November, 2018


U.S. Education Secretary Betsy DeVos has proposed new guidelines on a law that protects against sexual violence in schools.

The plan, announced last week, would change earlier guidelines created during the administration of Barack Obama. The rules are meant to guide schools in carrying out a 1972 federal law called Title IX. Title IX bars discrimination based on sex at American colleges and universities, as well as at elementary and secondary schools.

Schools that receive federal money are required to offer a clear way for students and employees to report sexual assault. Title IX rules require that schools hold fair, open investigations. In addition, they must provide special medical services for victims.

Under the new rules, colleges would only be required to investigate accusations if reported incidents happened on school grounds or in other areas overseen by the school. Current rules require colleges to investigate all student complaints, no matter where they happened or how they were reported.

The new guidelines also include several changes sought by groups that support students accused of sexual wrongdoing. For example, one of the new guidelines would give accused students the chance to cross-examine their accusers.

The new rules also give both accusers and those accused equal rights to see evidence and launch appeals.

The Department of Education says the proposed changes are aimed at providing a fair process to both the accuser and the accused. 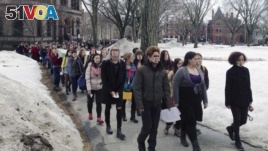 In a statement, Secretary DeVos said, "We can, and must, condemn sexual violence and punish those who perpetrate it, while ensuring a fair grievance process."

Since 2011, schools have used a series of letters issued by the Obama administration as guidance for how to deal with sexual violence complaints. Schools that did not follow the guidelines could be subject to federal investigations and risk losing federal funding.

Victims' rights groups had praised the Obama guidelines for helping to prevent schools from not taking sexual violence accusations and investigations seriously. Other groups argued the rules favored accusers too much. Some colleges criticized the guidelines for being complex and taking too long to carry out.

DeVos withdrew the 2011 Obama guidelines in September 2017. The newly released 150-page proposal aims to replace them. The new plan must go through a 60-day public comment process before it can be finalized.

Legal experts say the new rules could greatly reduce the number of complaints that schools investigate. Saunie Schuster is a lawyer who has advised several colleges on sexual misconduct cases. She told the Associated Press the majority of incidents of sexual violence happen off school grounds. In such cases, schools would no longer be required to launch an investigation. However, schools could still decide to do so.

Other experts say the new plan is likely to reduce the level of Education Department actions against schools found to be violating Title IX. That is because the new guidelines include a stronger definition for sexual harassment that could make it more difficult to hold schools legally responsible for violations. 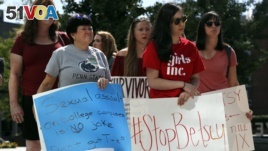 Sonja Breda, 23, right, holds a sign saying "Stop Betsy" as a group of survivors of sexual violence and their supporters gather to protest proposed changes to Title IX before a speech by Education Secretary Betsy DeVos, Thursday, Sept. 7, 2017.

Several groups and lawmakers have criticized the proposed new guidelines.

The American Civil Liberties Union, or ACLU said it "strongly opposes" the proposed guidelines. In a tweet, the group said the rules would lead to an unfair process "favoring the accused." It added that the guidelines would permit schools to "ignore their responsibility" under Title IX and "make schools less safe for survivors" of sexual abuse.

The head of the National Education Association, Lily Eskelsen García, wrote in statement that by approving the plan, DeVos had failed to carry out "the duty to protect all students." García added that the proposed rule changes "would encourage schools to ignore students who ask for help."

Virginia Representative Bobby Scott, the top Democrat on the U.S. House Education and the Workforce Committee, urged DeVos to withdraw the proposal. He called the guidelines "a damaging setback" in efforts to fight sexual violence.

Congresswoman Rosa DeLauro, a Democrat from Connecticut, is expected to become the next chairwoman of the committee that proposes the budget for the Department of Education. She said in a statement that DeVos' proposal fails to support survivors of sexual violence. "If she does not get this right in the final rule, Congress needs to step up to return the proper balance," DeLauro said.

Bryan Lynn wrote this story for VOA Learning English, based on a report from the Associated Press and online sources. Ashley Thompson was the editor.

misconduct – n. behavior or activity that is illegal or morally wrong

complaint – n. statement that you are unhappy or not satisfied with something

perpetrate – v. to carry out or commit

harassment – n. repeated attacks made against someone

encourage – v. tell or advise to do something