Update Required To play the media you will need to either update your browser to a recent version or update your Flash plugin.
By VOA
04 November, 2014


In the United States, citizens have voted to decide who will control Congress during President Barack Obama's last two years in office. Voters are electing all 435 members for the House of Representatives and one third of the Senate's 100 members. The media is closely watching several races that could lead to a Republican Party majority in the Senate. President Obama's Democratic Party currently holds 55 Senate seats.

Republicans are expected to hold and possibly expand their majority in the House of Representatives.

The latest public opinion studies suggest that Republican candidates will easily win Senate races in West Virginia, South Dakota and Montana. Democrats currently hold those seats. Studies also suggest Republicans are leading in Iowa, Arkansas, Colorado and Alaska. However, two races in the southern states of Georgia and Louisiana are expected to be very close and may require a runoff election. 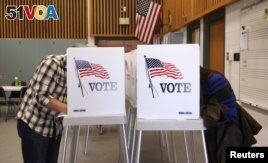 Voters fill in their ballots as they vote in the U.S. midterm elections at a polling place in Westminster, Colorado, Nov. 4, 2014.

If Republicans do gain control of both houses, the president could face new disputes over his health care reform law. Millions of people receive health insurance under the plan. However, Republicans have called for the law to be repealed. They say it gives the government too much control over health care.

Also, the two parties continue to disagree over the issues of government spending, tax policies and immigration reform. Mr. Obama has promised to use an executive order to put new immigration rules in place by the end of the year. Some Republicans say they will try to block the president from changing immigration policies.

A pro-Russian rebel leader was sworn in Tuesday as the head of a self-declared "people's republic" in eastern Ukraine. The ceremony followed elections condemned by the United Nations, the United States and the European Union. The government of Ukraine called the elections illegal and destabilizing.

Thirty-eight-year-old Alexander Zakharchenko was sworn in as prime minister of the so-called Donetsk People's Republic.

A statement Monday from the White House denounced the elections saying they did not follow "basic electoral norms." The U.S. State Department warned that "if Russia were to recognize the so-called elections, it would only serve to isolate it further."

Russia has not recognized the independence of separatist eastern Ukraine. But its support of the elections has hurt its relations with the West.

In a meeting with his security chiefs Tuesday, Ukraine's President Petro Poroshenko said that his country supports the current Russian supported peace plan. But, he said, other groups are not meeting their responsibilities.

North Korea has rejected future nuclear or human rights talks with the United States. The country says it is reacting to what it believes is U.S. attempts to overthrow the North Korean government.

The United Nations is currently considering an early version of a resolution to send North Korea to the International Criminal Court for its rights record. The U.N. report accuses the North Korean government of committing crimes against humanity.

Japan and the European Union are planning to present the non-binding resolution to the General Assembly. The U.S. has strongly supported the effort.

A North Korean foreign ministry spokesman accused the U.S. of "pursuing a policy for bringing down the state and social system" of North Korea by using human rights.

Hundreds of thousands of Shi'ite pilgrims are in the holy Iraqi city of Karbala. They are gathered there for the annual Ashura observance. They have done so even though there is a continuing threat of Sunni extremist attacks.

Iraq's security forces have deployed tens of thousands of troops to protect the travelers, or pilgrims. They are observing the 7th century death of Prophet Muhammad's grandson, Hussein. He is one of Shi'ite Islam's most respected people. His death marks the split between Shi'ite and Sunni Islam.

Sunni militants from the Islamic State group have claimed responsibility for a number of deadly attacks against Shi'ites who were traveling to Karbala for Ashura.

The group said Tuesday it spoke with four boys from a group of 153 who were taken in late May and held in a town 55 kilometers from Kobani.

Human Rights Watch said the boys described beatings given to anyone who tried to escape or did anything their captors considered misbehavior. The boys were also barred from speaking Kurdish, forced to pray five times a day and to watch videos of captives being killed.

A Kurdish official told the New York-based group that the militants released the final group of 25 of the boys last week.

sworn in (swear in) – v. to formally promise to carry out the duties of an office, and, by doing so, take on a new office or position

respected – adj. to be held in high regard