Update Required To play the media you will need to either update your browser to a recent version or update your Flash plugin.
By VOA
08 November, 2013

Two American states elected governors this week, while several big cities chose mayors. The elections were the first since the troubled launch of the new federal health-care website and the 16-day partial shutdown of the government. Conservative Republicans in Congress, including Tea Party members, supported the shutdown as part of their opposition to the program known as Obamacare.

Political experts looked at the governors' races for clues to how Americans may vote in congressional elections next year. Voters will choose all 435 members of the House of Representatives and one-third of the 100 senators.

Observers think the government shutdown helped Democrat Terry McAuliffe win the governor's race in Virginia. Many federal workers live there and federal spending is important to the state economy.

"Virginia understands that Obamacare is a failure and that you want to be in charge of your health care, and not the government."

But voters chose Mr. McAuliffe in his second try for public office.

"Just think about what Virginia has been able to accomplish when we work together."

In the other governor's race, voters in New Jersey re-elected Republican Chris Christie. He won 60 percent of the vote with the support of many Democrats.

"Leadership is much less about talking than it is about listening. About bringing people around the table, listening to each other, showing them respect."

Mr. Christie received much praise for his leadership after Superstorm Sandy hit the state a year ago. Many people see him as a possible 2016 candidate for president.

"He has been able to take a very Democratic state – Obama won New Jersey by 17 points in the last two elections – and become a governor who could not only win a close election as he did the first time, but win a landslide election."

Ford O'Connell is a Republican strategist. He says Tea Party Republicans need to learn from the winning candidates.

"Well, it leaves the Tea Party really in an echo chamber, just talking to the base. The real problem for the Tea Party is how do they expand their appeal beyond the Republican base." 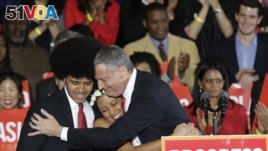 Democratic Mayor-elect of New York, Bill de Blasio, embraces his son Dante, left, and daughter Chiara, center, after he was elected.
Some people predict a battle for the heart and soul of the party. Will the Republicans move toward the conservatism of the Tea Party movement or away from it? Ford O'Connell is not sure.

"Depending on how this battle turns out, it could lead to more dysfunction and government shutdowns. And that's something that people all over the world have an eye on because America is still the most robust economy in the world."

In New York City, voters on Tuesday elected Bill de Blasio as mayor. His election put the city under Democratic Party control for the first time in 20 years. He replaces Michael Bloomberg. Voters in other cities, including Atlanta, Boston and Miami, also elected mayors.