Update Required To play the media you will need to either update your browser to a recent version or update your Flash plugin.
By Dan Novak
26 September 2021

The rule aims to reduce the use of hydrofluorocarbons, called HFCs, by 85 percent over the next 15 years. HFCs are industrial chemicals used in appliances like refrigerators and air conditioners. They also have other uses.

The Environmental Protection agency, or EPA, says the chemicals are greenhouse gasses. Such gasses trap heat in the Earth's atmosphere. The EPA says HFCs are thousands of times more powerful than carbon dioxide in trapping heat. 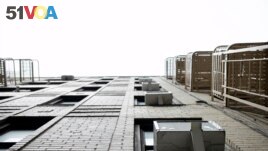 The new rule is expected to take effect in late October. The EPA said in a statement that limiting the use of HFCs worldwide is expected to avoid up to .5 degrees Celsius of global warming by 2100.

Gina McCarthy is the National Climate Advisor. She told reporters recently that the rule "really sends a signal to the rest of the world that we are all in on climate change."

The rule was announced about six weeks before the United Nations climate meeting in Glasgow, Scotland.

President Joe Biden has already issued an executive action aimed at climate change. Reports say he is expected to announce several climate measures through executive actions. Other climate proposals are in spending legislation being considered by Congress.

The EPA said the new rule is one of the most "consequential" in its effects on the climate. Along with other measures, the Biden administration said the rule can reduce 4.5 billion metric tons of carbon dioxide by 2050. That is equal to almost three years' worth of gasses released by the U.S. power industry at 2019 levels. Environmental and business groups supported the new HFC rules.

The Biden administration said it is also creating an interagency group to reduce HFCs, including preventing the illegal trade, production, sale or use of the climate-damaging gases. The group led by the EPA and the Department of Homeland Security will punish violations of the law.

The EPA rule also creates a complex trading system that permits some use and trade of the chemicals.

The rule brings the U.S. in agreement with an amendment to the 1987 Montreal Protocol. That is an international treaty aimed at reducing chemicals that damage the Earth's ozone, a layer of oxygen that blocks harmful solar radiation. The United States has not yet approved the amendment.

McCarthy said she does not know when Biden will send the amendment to the treaty to the Senate for approval.

Valerie Volcovici reported this story for Reuters and Matthew Daly for The Associated Press. Dan Novak adapted it for VOA Learning English. Mario Ritter, Jr. was the editor.

appliance — n. a machine, such as a refrigerator, stove or dishwasher, that is powered by electricity and that people use to do a job in their houses

consequential — adj. important; happening as a result of some earlier action