US Expected to Approve Pfizer Vaccine for Teens

Update Required To play the media you will need to either update your browser to a recent version or update your Flash plugin.
By Bryan Lynn
04 May 2021


The United States is expected to approve the use of Pfizer's COVID-19 vaccine for young people aged 12 to 15 by next week.

A federal official told The Associated Press that the Food and Drug Administration (FDA) plans to expand its emergency use authorization for Pfizer's vaccine to the new age group.

The official did not want to be identified because there has been no public announcement about Pfizer's vaccine plans. The New York Times first reported on the expected timing of the plan.

The official said the approval is expected to come by early next week. The person added that the FDA also plans to approve Pfizer's two-shot vaccine for even younger children later this year. 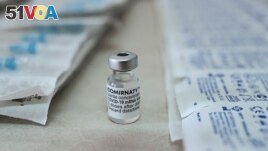 This photograph shows a vial of Pfizer/BioNTech vaccine against the Covid-19 (novel coronavirus) at the health center of Elafonissos, on the Elafonissos Island, on April 23, 2021.

The FDA's expansion of its emergency use authorization is the first step in the approval process. That action would be followed by a meeting of a federal vaccine advisory committee to discuss whether to recommend the injection for 12- to 15-year-olds.

If the Centers for Disease Control and Prevention approves the committee's recommendation, the shots could begin. Those steps could be completed in a matter of days.

In March, Pfizer released the first results from a vaccine study involving 2,260 U.S. volunteers aged 12 to 15. The study showed there were no cases of COVID-19 among fully vaccinated individuals compared with 18 in the group who were given a placebo, a shot of inactive substance.

The 12- to 15-year-olds had side effects similar to young adults, Pfizer said. The main side effects are pain, increased temperature, tiredness and chills, especially after the second shot. The study will continue to follow test subjects for two years to gain more information about long-term protection and safety.

Pfizer is not the only company seeking to lower the age limit for its vaccine. Results are also expected by the middle of this year from a U.S. study of Moderna's vaccine in 12- to 17-year-olds.

The FDA is permitting both companies to also begin U.S. studies in children 11 and younger.

More than 131 million doses of Pfizer's vaccine have already been given in the U.S., where demand for vaccines among adults has greatly slowed in recent weeks.

Younger people generally have a much lower risk of experiencing serious side effects from COVID-19. But they started making up a larger share of new U.S. cases as an increasing number of adults got vaccinated and some virus-related restrictions were eased.

Officials hope that expanding the vaccines to young people will help efforts to safely reopen schools in the autumn.

The U.S. has ordered at least 300 million doses of the Pfizer shot by the end of July, enough to protect 150 million people.

The Associated Press reported on this story. Bryan Lynn adapted the report for VOA Learning English. Hai Do was the editor.

authorize – v. to give permission for something to happen

recommend – v. to suggest or propose

placebo – n. a harmless pill or medicine used as a control in testing new drugs

chills – n. a feeling of cold