US Farmers Preparing for Long-Term Effects of Trade War

Update Required To play the media you will need to either update your browser to a recent version or update your Flash plugin.
By Susan Shand
19 July, 2018


Brian Duncan slowly moves his hands over the waves of grain growing behind his home in rural Illinois.

Images like this make one think of the good life on a successful American farm. But it hides the hardship Duncan currently faces.

Brian Duncan serves as vice president of the Illinois Farm Bureau, a not-for-profit organization for the state's farmers.

Wheat is just one product that grows on Duncan's farm. He also raises pigs. The farm is also home to about 70,000 pigs every year. He sells their meat to buyers overseas.

Duncan said his crops "were projected to be profitable this year." They were, but not anymore.

Pork, the meat from pigs, is now subject to a 62 percent Chinese tariff, and demand is decreasing in China, one of the world's largest pork markets.

"Once that tariff went on, the pork stopped going into China. Not going to Taiwan, either. Not finding other routes. That market just disappeared," said Duncan.

"The difference between making and losing money in the hog industry is exports," said Duncan. He added that for most hog farmers, exports are the only way to be profitable.

"The reality is 95 percent of the world population is outside these borders. We need them...as markets and trading partners," Duncan said. 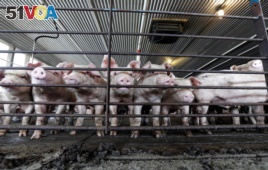 FILE -Pork is one U.S. farm product that has fallen in value since a 62 percent Chinese tariff was imposed.

U.S. farmers like Duncan are beginning to feel the effects of tariffs set up by China to answer U.S. tariffs on Chinese steel and aluminum.

In May 2017, U.S. President Donald Trump said he had a possible trade deal with China.

The goal, in part, was to reduce the trade deficit with China. But this month, the Trump administration argued with China over suspected theft of intellectual property and technology. The two sides also argued over China's system of pressuring of foreign companies doing business in China to give away intellectual property.

U.S. officials are preparing to announce tariffs on an additional $16 billion worth of Chinese exports. The administration also is considering tariffs on another $200 billion in Chinese goods. China has promised more action to answer any U.S. move.

As the trade war continues, Duncan is losing money on nearly everything growing on his farm because of tariffs.

"Soybeans were a buck and a half higher than they are now," he told VOA. "Corn was 50 to 70 cents higher than it is now. So, certainly the attitude has changed here in the last two to three weeks."

So have Duncan's emotions.

"Frustrated...This was predictable — the outcome. There was a better way to go about this," he said.

Tamara Nelsen is senior director of commodities with the Illinois Farm Bureau. She says that history shows the long-term result of tariffs and trade restrictions is a loss of markets and a loss of competitiveness for U.S. products.

For Duncan, the long-term effect will be on the image of U.S. farm products. This is his biggest concern.

"How are we going to be seen? Is a country going to look at us and say, ‘Why would I sign an agreement with them, anyhow? If they don't like something we do, are they just going to put a bunch of tariffs up and blow things up?' How are we seen going forward in the next five, 10, 15, 20 years? For me, that is the biggest issue more than the here and now."

But in the here and now is the difficult reality that farmers are also experiencing their fifth year of falling earnings.

"We've seen farm income cut in half in the last four years for various reasons. We could easily see it cut in half again if we lost all our export markets," Duncan said. He also said this could increase farmers' dependence on government aid at a time when U.S. lawmakers debate legislation that the agriculture industry needs to provide security.

All of the changes have him thinking about his choices the next time Duncan goes to the ballot box.

"It's the economy, stupid. My vote will depend an awful lot on the farm economy," he said. "That's just the world I live in."

Kane Farabaugh reported this story for VOA. Susan Shand adapted the story for Learning English. George Grow was the editor.

route – n. a way of achieving or doing something

hog – n. another word for pig

theft – n. the act of stealing something

retaliation – n. to do something bad to someone who has hurt you or treated you badly

frustrate – v. : to keep (someone) from doing something