Update Required To play the media you will need to either update your browser to a recent version or update your Flash plugin.
By Joe De Capua and Derek Henkle
2012-5-15 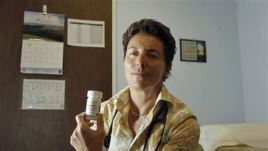 Dr. Lisa Sterman holds a bottle of Truvada pills that she prescribes for patients at high risk for developing AIDS in San Francisco.

Currently, in the United States, the drug is only approved for use as a treatment for people already infected with HIV, the virus that causes AIDS. Now a government advisory committee says Truvada should become the first drug approved for use to prevent HIV.

The Food and Drug Administration is not required to follow the advice of its Antiviral Drugs Advisory Committee, but usually does. The FDA is expected to decide by June fifteenth.

Mitchell Warren, head of the HIV prevention group AVAC, explains that Truvada is a combination pill.

MITCHELL WARREN: "It's made up of two different antiretrovirals -- tenofovir and emtricitabine. And those two drugs had already been approved by the FDA a number of years ago individually, and then about eight years ago they were approved as the combination drug. But all of those approvals related to the use of the drug for treating people who are already infected with HIV."

The advisory committee held a twelve-hour hearing on May tenth to consider the evidence. The committee urged the FDA to approve the drug for use by those who are considered at high risk for getting infected. The committee held two separate votes on recommending Truvada. One vote dealt with gay and bisexual men. The other dealt with heterosexual couples where one person has HIV.

MITCHELL WARREN: "If you are at risk of HIV, if you perceive yourself to be at risk, if you're able to take this pill every day as part of a combination of activities, including getting frequent HIV testing, you can reduce your risk of infection quite substantially."

The manufacturer of Truvada, Gilead, would have to produce what is known as a risk evaluation and mitigation strategy. This would be a plan to help ensure the safe and effective use of Truvada. The plan would include extensive training for health care providers.

Some doctors say Truvada is a step toward ending the threat from AIDS. But some critics say the drug could give people a false sense of security and make them less likely to use condoms. Critics say it could also take financial resources away from more cost-effective methods of prevention, like using condoms.

Truvada currently sells for about fourteen thousand dollars a year. The drug would cost much less in developing countries, possibly several hundred dollars a year. But that could still be too high for some countries.