US Fights Ransomware with $10 Million Reward

Update Required To play the media you will need to either update your browser to a recent version or update your Flash plugin.
By Dan Friedell
15 July 2021


The United States government says it will pay up to $10 million for information on criminal activity over computer networks against important U.S. infrastructure.

Cyber criminals often take advantage of openings in security to take control of computer systems. They then ask for large amounts of money – often millions of dollars – to give back control of the system to the owner. This is known as a ransom. The U.S. government believes these criminals do their work without fear of arrest in Russia and several other countries. 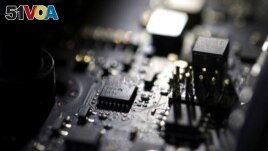 FILE - The inside of a computer is seen in Jersey City, N.J., Feb 23, 2019. A ransomware attack paralyzed the networks of at least 200 U.S. companies July 2, 2021, according to a cybersecurity researcher.

People can now send information, known as a tip, about criminals to the U.S. government. They can send tips without giving their name through a form on the part of the internet known as the dark web.

Sometimes the U.S. government is the target of a cyberattack, but other times, private companies that are important to the U.S. economy are victims as well.

For example, an attack earlier this year against Colonial Pipeline disrupted work and travel for about a week in the eastern part of the U.S. The criminal group used software known as ransomware to take control of the pipeline's computer systems. It only released its control after getting a payment of over $4 million. Most of the money was later recovered by the U.S. Federal Bureau of Investigation.

REvil, another criminal group based in Russia, launched a ransomware attack on July 2 against more than 1,000 organizations and businesses around the world. After the group's disappearance, an administration official would not say if the U.S. made the group go away. And a Russian official said he did not know about the group.

Some cybercrime experts, however, think REvil may have disappeared to avoid U.S. officials.

President Joe Biden's administration is also educating businesses and individuals on how to keep their computer systems safe through a new website called stopransomware.gov.

And the U.S. Treasury Department said it will work with banks and technology companies to avoid becoming victims of ransomware attacks.

Frank Bajak wrote this story for The Associated Press. Dan Friedell adapted it for Learning English. Hai Do was the editor.

How will the U.S. reward of $10 million affect the ransomware business? Tell us in the Comments Section and visit 51VOA.COM.

cyber – adj. relating to computers or the internet

infrastructure– n. the basic equipment and structures (such as roads and bridges) that are needed for a country, region, or organization to function properly

ransomware– n. software used by criminals to get money in return for the releasing control of a computer system