Update Required To play the media you will need to either update your browser to a recent version or update your Flash plugin.
By Mehrnoush Karimian-Ainsworth
29 June, 2016


The United States government is increasingly using social media to investigate people who may represent a security threat to the country.

The latest example comes from the Department of Homeland Security's Customs and Border Protection office. It wants to ask foreign visitors to provide information about their accounts on social media sites like Facebook and Twitter.

An optional – or non-required – question would be added to the form that people must complete before entering the United States.

The form asks information like the person's name, phone number, and countries they have visited since 2011. 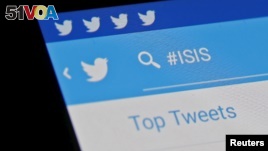 FILE - The Islamic State hashtag (#ISIS) is seen typed into the Twitter application on a smartphone in this picture illustration taken in Zenica, Bosnia and Herzegovina.

The proposed social media question would only concern travelers who do not need a visa to enter the United States. Travelers from 38 countries are permitted to enter the U.S. without a visa.

The Customs and Border Protection office said in its proposal that adding the question would affect about 24 million people.

Senator John McCain sponsored a bill that would require the Department of Homeland Security to look at internet activity and social media profiles of anyone seeking entry to the United States.

Senators Martin Heinrich and Jeff Flake sponsored a bill that would permit the Department of Homeland Security to "search open source information, including internet and social media postings" of people applying for a visa to enter the U.S.

Senator Chuck Schumer has proposed a different plan to help officials search for possible terror links. He wants to reward people who send officials terrorism-related information from social media posts. Anyone whose information leads to the arrest of someone planning an attack in the U.S. would be paid money.

Schumer's proposal would make use of the Justice Department's Rewards for Justice program.

Schumer said that investigators need the public's help. Schumer said he wants to award people who come forward with information anywhere from $25,000 to $25 million.

In the House of Representatives, Congressman Stephen Fincher proposed a bill that centered on stopping prisoners from becoming radicalized.

His bill would require volunteers in federal prisons to provide their social media accounts during their background investigations. Fincher called U.S. prisons a "breeding ground" for Islamic radicalization.

Chris Hannas reported this story for VOANews. Mehrnoush Karimian-Ainsworth adapted the report for Learning English. Ashley Thompson was the editor.

optional – adj. available as a choice but not required

sponsored – v. to introduce and support (a proposal) in a legislative assembly

breeding ground – expression. a situation or place in which bad things can easily begin to develop