US, Haiti Seek Release of 17 Missionaries Taken by Gang

Update Required To play the media you will need to either update your browser to a recent version or update your Flash plugin.
By Ashley Thompson
18 October 2021


United States officials are working with Haitian officials to try to secure the release of 12 adults and five children with a U.S.- based religious group. All were taken over the weekend by members of a criminal group known for killings and kidnappings.

The 16 Americans and one Canadian are with Christian Aid Ministries. They were taken by a group called 400 Mawozo. The gang controls the Croix-des-Bouquets area east of the capital Port-au-Prince, said a police official.

The kidnapping happened Saturday in the community of Ganthier, which lies in the gang's area.

As officials sought the release of the 17 people, local unions and other organizations were set to launch a strike Monday to protest Haiti's worsening security situation.

Haiti is again struggling with a rise in gang-related kidnappings, which had lessened in recent months. The rise in such crimes follows the murder of President Jovenel Moise on July 7 and a powerful earthquake that killed more than 2,200 people in August.

"Everyone is concerned. They're kidnapping from all social classes," said Méhu Changeux. He is president of Haiti's Association of Owners and Drivers. He spoke on Haiti's Magik9 radio station.

He said the worker strike would continue until the government could guarantee people's safety. 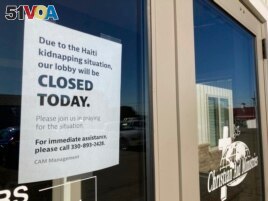 The Christian Aid Ministries headquarters in Berlin, Ohio, is closed Monday, Oct. 18, 2021, due to kidnappings in Haiti. U.S. officials are working with Haitian authorities to try to secure their release. (AP Photo/Julie Carr Smyth)

The U.S. State Department said Sunday that it was in communication with senior Haitian officials and would continue to work with them and other partners.

"The welfare and safety of U.S. citizens abroad is one of the highest priorities of the Department of State," the agency said in a statement.

Christian Aid Ministries said the kidnapped group included seven women, five men and five children, including a 2-year-old. The organization said the group was taken while on a trip to visit an orphanage -- a home for children who do not have living parents.

Christian Aid Ministries said in a statement, "As an organization, we commit this situation to God and trust him to see us through."

A yearly report published last year by Christian Aid Ministries said its American workers had returned to their base in Haiti after a nine-month break "due to political unrest." It noted the difficulties that come from such unrest.

Nearly a year ago, Haitian police publicly sought the supposed leader of the 400 Mawozo gang, Wilson Joseph. The police planned to charge him with murder, attempted murder, kidnapping, car stealing and the hijacking of trucks carrying goods.

Joseph also goes by the name of "Lanmò Sanjou," which means "death doesn't know which day it's coming."

As kidnapping cases rise, gangs have demanded money in exchange for a person's return. The gangs have at times asked for more than $1 million. Sometimes they kill those they have kidnapped, officials report.

At least 328 kidnappings were reported to Haiti's National Police in the first eight months of 2021, compared with a total of 234 for all of 2020. Those numbers come from the United Nations Integrated Office in Haiti.

Gangs have been accused of kidnapping schoolchildren, doctors, police officers, bus passengers and others as they grow more powerful. In April, a man who claimed to be the leader of 400 Mawozo told a radio station that the gang was responsible for kidnapping five priests, two nuns and three family members of one of the priests that month. The people were later released.

The increase in kidnappings and gang-related violence has forced Haitians to avoid some gang-controlled areas. Others choose to stay home. This, in turn, means less money for people like Charles Pierre. He is a moto taxi driver in Port-au-Prince. He has several children to feed.

"People are not going out in the streets," he said. "We cannot find people to transport."

missionary - n. a person who is sent to a foreign country to do religious work (such as to convince people to join a religion or to help people who are sick, poor, etc.

priest - n. a person who has the authority to lead or perform ceremonies in some religions and especially in some Christian religions

nun - n. a woman who is a member of a religious community and who usually promises to remain poor, unmarried, and separate from the rest of society in order to serve God