Update Required To play the media you will need to either update your browser to a recent version or update your Flash plugin.
By Jill Robbins
17 August 2021


United States health experts are expected to recommend additional COVID-19 vaccine shots for all Americans. The additional injection, called a booster, would be given eight months after a person received their second shot of the vaccine.

The goal of this move is to provide longer-lasting protection as the Delta variant of the virus spreads across the country.

Federal health officials have been studying whether booster shots for the vaccinated would be needed as early as this autumn. They reviewed case numbers in the U.S. as well as the situation in other countries such as Israel. Early studies in Israel suggest the vaccine's protection against serious illness dropped among those vaccinated in January.

Two people who know about the matter talked with The Associated Press. They expect an announcement on the booster recommendation this week.

The U.S. Food and Drug Administration, or FDA, would have to officially approve the COVID-19 vaccines before additional injections could be given. At this time, the FDA has only given emergency approval for vaccines from Pfizer-BioNTech, Moderna and Johnson & Johnson. Full approval of the Pfizer shot is expected in the coming weeks. 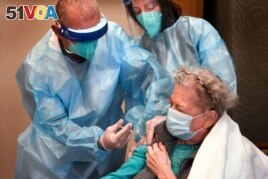 Last week, U.S. health officials recommended boosters for some with weakened immune systems. The group includes people who have a higher risk of catching the virus such as cancer patients and organ transplant recipients. Among them, there is evidence that vaccines provide less protection over time.

The director of the National Institutes of Health (NIH), Dr. Francis Collins, said Sunday the U.S. could decide in the coming weeks whether to offer booster shots to Americans this fall.

Among the first to receive them could be health care workers, older people and those in nursing homes. Because of their higher risk of catching the virus, they were some of the first Americans to be vaccinated last December.

Since then, the Centers for Disease Control and Prevention says, more than 198 million Americans have received at least one shot of a COVID-19 vaccine. Still, the U.S. is seeing a large increase of virus cases from the fast-spreading Delta variant in unvaccinated communities. The variant is also responsible for an increasing number of so-called "breakthrough infections" of fully vaccinated people.

Israel has one of the world's highest vaccination rates with the Pfizer shot. It is trying to control the increase of cases from the Delta variant by offering a booster shot to all people over 60. And European health officials said they are talking with vaccine developers about the need for boosters.

NIH head Collins said, "There is a concern that the vaccine may start to wane in its effectiveness." He noted that the Delta variant is difficult to deal with. Collins continued, "The combination of those two means we may need boosters."

Health officials from the World Health Organization (WHO) have asked wealthier and more-vaccinated countries to delay the booster shots. They feel it would be better to give shots to unvaccinated people in the developing world.

Zeke Miller reported on this story for the Associated Press. Jill Robbins adapted it for Learning English. Hai Do was the editor.

recommend – v. to say that someone or something is good and deserves to be chosen

transplant – n. medical. to perform a medical operation in which an organ or other part that has been removed from the body of one person is put into the body of another person

nursing home – n. a place where people who are old or who are unable to take care of themselves can live and be taken care of

wane – n. to decrease in size, amount, length, or quality

What do you think of the idea of getting a third (or booster) vaccine shot? We want to hear from you. Write to us in the Comments Section.