US High Court Says Religious Schools Can Get Public Money

Update Required To play the media you will need to either update your browser to a recent version or update your Flash plugin.
By Hai Do
21 June 2022


The U.S. Supreme Court ruled Tuesday that the state of Maine may not bar religious schools from a tuition assistance program.

The case involved a rule of Maine's Department of Education. The rule permits families who live in areas that do not have public schools to receive public money to send their children to a public or private school of their choosing. That program, however, bars the money from going to religious schools.

Families that want to send their children to religious schools say the law violates their religious rights. 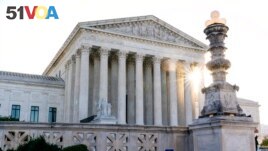 FILE - The U.S. Supreme Court in Washington, seen here on Nov. 10, 2020, ruled Tuesday that the state of Maine may not bar religious schools from a tuition assistance program.

In a 6-3 decision, the high court ruled that the Maine program violates the Constitution's protections for religious freedoms. Writing for the majority, Chief Justice John Roberts wrote, "The State pays tuition for certain students at private schools — so long as the schools are not religious. That is discrimination against religion."

The court's three liberal justices disagreed with the majority decision. "This Court continues to dismantle the wall of separation between church and state that the Framers fought to build," Justice Sonia Sotomayor wrote.

The ruling is the latest in a line of decisions from the Supreme Court that have favored religion-based discrimination claims. The court is separately looking at the case of a football coach who says he has a First Amendment right to pray at midfield immediately after games.

The court's decision on Tuesday immediately affects Maine and Vermont, a neighboring state with a similar program. But the ruling could also fuel a renewed push for school choice programs in some of the states that have so far not directed public money to private, religious education.

In the Maine case, two families wanted to send their children to Christian schools in Bangor and Waterville. The schools, Bangor Christian School and Temple Academy, have said in court records that they do not accept gay, lesbian or transgender students and teachers.

At the time, Maine officials said that religious schools are excluded from the program "because the education they provide is not equivalent to" public education.

The lawsuit was filed last year following a Supreme Court ruling saying that a Missouri program was wrong to deny money to a religious school for fixing a playground. That ruling opened the door for more cases aimed at changing rules about religious schools and public money.

Last year, the Supreme Court ruled in a case from Montana that states do not have to permit public money to be used in private education. But they cannot keep religious schools out of such programs, once created.

Hai Do wrote this story for VOA Learning English. Write to us in the Comments Section or on 51VOA.COM.

tuition –n. money that is paid to a school to study there

dismantle –v. to destroy something in an orderly way; to gradually cause something to come to an end

equivalent –adj. having the same value, use or meaning

file –v. to give a legal document to a court for consideration by legal officials