How Did US Miss the Islamic State Threat?

Update Required To play the media you will need to either update your browser to a recent version or update your Flash plugin.
By Kelly Jean Kelly
02 November, 2014


United States and coalition airplanes fly over the Syrian town of Kobani, just across the border from Turkey. They are trying to keep Islamic State fighters away from the town.

But the fighters keep coming.

The Islamic State group has created fear around the Iraqi capital, Baghdad. It has helped destabilize the Middle East and hurt U.S. interests.

The group's success has made many ask: how did the United States not see the threat coming?

Reuel Marc Gerecht is a former Middle Eastern specialist who worked at the Central Intelligence Agency. 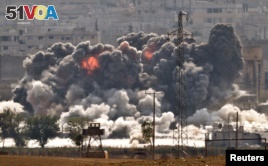 Smoke and flames rise from an Islamic State fighters' position in the town of Kobani during airstrikes by the US led coalition. (AP Photo/Vadim Ghirda)

Mr. Gerecht believes intelligence experts, such as those at the CIA, informed U.S. lawmakers about the threat of the Islamic State group. Since early this year, top intelligence officials publicly warned that the militants would try to take territory in Iraq and Syria. But, Mr. Gerecht says, politics got in the way.

"I strongly suspect that what they had written about it certainly didn't match well with the president's description of calling them, you know, the junior varsity team."

Brian Fishman is an anti-terrorism expert with the New America Foundation. He says many policymakers did not want to believe warnings about the Islamic State — especially because the United States was withdrawing troops from Iraq.

"Republicans and many in the military that had been central to the counter-insurgency campaign in Iraq, frankly, kind of wanted to claim success."

In fact, Mr. Fishman says nobody in Washington wanted to hear bad news about the area.

Sarah Chayes was a special adviser to Admiral Mike Mullen, the former chairman of the Joint Chiefs of Staff. She worries that part of the problem are changes the intelligence community made after the 2001 terror attacks on the United States. At that time, she said, intelligence experts began to work on finding and fixing targets for the military.

The CIA disagrees. A senior official told VOA that CIA experts have always tried to provide "deeper context" and "the big picture."

Brian Fishman with the New America Foundation suggests at least one improvement to the process. He says the United States could reconsider how it defines a threat.

"I think that we did make a misstep in defining threats only as groups that are actively and directly trying to attack the United States."

The rise of the Islamic State group serves as an important example.

*This report was based on a story from VOA's Jeff Seldin. Kelly Jean Kelly wrote the story for VOA Learning English. George Grow was the editor.

underestimated - v. thought of someone or something as being lower in ability than that person or thing actually is

destabilized - v. to cause a government to be unable to continue working in the usual or desired way

junior varsity - n. a sports team whose members are less experienced and usually younger than members on a varsity team

misstep - n. an action or decision that is a mistake