Update Required To play the media you will need to either update your browser to a recent version or update your Flash plugin.
By Bryan Lynn
18 August 2021


The U.S. government is investigating a series of crashes involving Tesla cars that were using the American automaker's driver assistance systems.

The National Highway Traffic Safety Administration (NHTSA) said this week it had identified 11 crashes involving Tesla models that struck emergency vehicles that were parked on the road. Those accidents resulted in one death and 17 injuries.

Three of the 11 crashes took place in California, while others were in Florida, Texas, Massachusetts and other states. The four latest crashes happened in 2021, including one in July.

The NHTSA said it had confirmed that the Tesla cars involved were using either the company's Autopilot or Traffic-Aware Cruise Control systems just before the crashes. Both systems use a series of cameras and sensors to assist drivers. 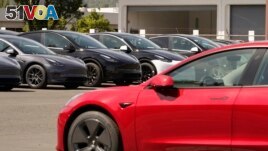 Tesla says its Autopilot system is designed to permit full self-driving capabilities. But the company says when using this tool, drivers should still keep their hands on the steering wheel and be ready to take control if the system fails to work.

The company's Traffic-Aware Cruise Control is designed to keep the vehicle at similar speeds as surrounding traffic.

The NHTSA said most of the accidents took place after dark. But it noted that the parked emergency vehicles used safety measures, such as flashing lights, flares or road markers.

The agency said the investigation will cover 765,000 Tesla vehicles. That number includes nearly every vehicle the company has sold in the U.S. since the start of the 2014 model year.

The NHTSA announced it had begun its investigation in documents published online.

Tesla has not officially commented. Telsa chief Elon Musk has repeatedly defended the Autopilot system. In April, he tweeted that Tesla vehicles using Autopilot were "now approaching 10 times lower chance of accident than (an) average vehicle."

The agency closed an earlier investigation into Autopilot in 2017 without taking any action. After its new investigation, the NHTSA could decide again to take no action. Or it could demand a vehicle recall, which could place limits on how, when and where Autopilot operates.

In a statement to the French press agency AFP, an NHTSA spokesperson said the agency wants the public to know that "no commercially available motor vehicles today are capable of driving themselves."

The spokesperson noted that driver assistance programs can improve safety, help drivers avoid accidents and reduce the severity of crashes. But the spokesperson added that, "as with all technologies and equipment on motor vehicles, drivers must use them correctly and responsibly."

The National Transportation Safety Board (NTSB) has said Autopilot was operating in at least three deadly Tesla crashes in the U.S. since 2016. It has criticized Tesla's lack of system safeguards for Autopilot, and NHTSA's failure to take steps to ensure the safety of the system.

The chair of the NTSB, Jennifer Homendy, praised the NHTSA's new investigation. She said the board has urged the agency to develop standards for driver assistance systems. It has also called for requirements for automakers to use "system safeguards that limit the use of automated vehicle control systems to those conditions for which they were designed."

Jason Levine, head of the nonprofit Center for Auto Safety, also welcomed the new investigation. He said the NHTSA had finally answered longstanding calls "to investigate Tesla for putting technology on the road that will be foreseeably misused in a way that is leading to crashes, injuries, and deaths." Levine added that he thinks the investigation should be expanded to include crashes beyond those just involving emergency vehicles.

Bryan Lynn wrote this story for VOA Learning English based on reports from The Associated Press, Reuters and Agence France-Presse. Susan Shand was the editor.

park – v. to leave a vehicle in a particular place for a period of time

steering – n. the controlling of a vehicle in one direction or another

flare – n. a piece of safety equipment that produces a bright signal

approach – v. to come close in distance or time

recall – v. to order the return of something

automate –v. to use machines and computers instead of people to do something

foreseeable – adj. as far in the future as you can imagine