US Sets Up First All-American Fire Base in Iraq

Update Required To play the media you will need to either update your browser to a recent version or update your Flash plugin.
By Jim Dresbach
22 March, 2016


The U.S. military has built the first all-American fire base in Iraq.

A fire base is an area in a war zone where artillery can be massed to provide firepower in support of other military units.

The fire base is near the town of Makhmur, in northern Iraq. About 200 U.S. Marines have been assigned to the base. Their mission is to protect American advisers and Iraqis who are at a nearby Iraqi military base. 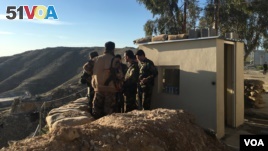 Iraqi Kurdish Peshmerga soldiers huddle around Maj. Gen. Sirwan Barzani in Makhmur, Iraq. Makhmur is expected to serve as one of the staging points for Iraqi and Peshmerga forces in the advance against the Islamic State-controlled city of Mosul, March 8, 2016. The Iraqis are being supported by an all-American fire base.

An American spokesman, Colonel Steve Warren, said: "This is the first time that we've established a spot that's only American." Warren continued to say deploying the Marines to a U.S.-only base was "a tactical decision" made "because of space" restrictions.

The Iraqis are preparing an offensive to capture Mosul. The town has been occupied by the Islamic State for nearly two years.

The fire base is behind the front lines, and the American base has been attacked. Islamic State fighters fired small arms at the base Monday. Two IS fighters were killed. No Americans were wounded.

The arms exchange took place two days after U.S. Marine Staff Sergeant Louis Cardin was killed at the base. IS fighters fired two rockets during that assault.

firepower – n. the amount or strength of military weapons that can be used against an enemy

tactical – adj. used for a specific plan that is created to achieve a particular goal in war