US, Japan, France Urge Companies to Depend Less on China

Update Required To play the media you will need to either update your browser to a recent version or update your Flash plugin.
By Pete Musto
02 July 2020


The United States, Japan and France are urging their businesses to depend less on China to make smartphones, drugs and many other products.

But few companies appear to want to leave China's skilled workforce and suppliers of unprocessed materials to move to other countries.

Too much dependence on China leaves global companies open to costly problems during major world crises. The spread of the new coronavirus is one example. Also, the U.S. and China have been locked in a trade war for several years. Both countries have raised taxes on the goods they exchange.

Drug makers are one group that is trying to reduce dependence on Chinese suppliers. The industry is establishing sources of unprocessed materials in the U.S. and Europe. But the medical device, consumer electronics and other industries are continuing to depend on China.

Harley Seyedin is the president of the American Chamber of Commerce in South China. He told the Associated Press: "I don't know of a single company right now that is moving ahead with any plans to move."

China's rise as the world's low-cost factory has helped to lower costs for consumers and increased many companies' profits. But it has fueled political tension over lost American and European manufacturing jobs. Governments and industry experts worry dependence on China can be a threat to supply chains and national security.

Chinese factories put together most of the world's smartphones and consumer electronics. They produce a growing share of medical equipment, industrial robots and other high technology goods. The country also is a leading supplier of vitamin C and ingredients for antibiotics and other medicines.

Philip Richardson manufactures sound equipment in Panyu, near Hong Kong. He said he has considered Vietnam and other countries. But he said while worker pay there might be 40 percent lower, the savings will be used up by the cost of losing his network of Chinese suppliers.

"We gave it consideration for about a minute, and it doesn't make sense," said Richardson, who has worked in China for 22 years. 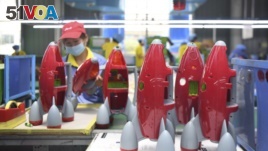 In this May 27, 2020, photo released by Xinhua News Agency, a worker makes plastic toys at a factory in Zhangjiajie, central China's Hunan Province.

In Japan, the government considers China a direct competitor. So Japan is offering $2 billion to companies that move production to the country in a virus aid program announced in April. It has also offered $220 million to Japanese companies in China if they move to other countries.

The U.S.-China trade dispute has created concern about China's leading position as a supplier of active pharmaceutical ingredients, or APIs. These are the substances used to make drugs and vitamins. Some American experts warn China might withhold APIs.

In May, the U.S. government gave a contract worth up to $812 million over 10 years to the Phlow Corp. The Virginia-based company is working to protect against drug shortages by producing necessary ingredients.

Drugmaker Sanofi is also creating an API supplier to reduce dependence on China. Sanofi said the company will be the second biggest global producer, with yearly sales of over $1 billion by 2022.

India and Indonesia also have announced plans to increase their own production of unprocessed drug ingredients. But Sakshi Sikka of the market research company Fitch Solutions said those changes are politically driven and will increase costs. China's position as a top supplier, he said, is unlikely to change soon.

Companies also increasingly are trying to sell to China's 1.3 billion consumers at a time when spending growth in Western countries is low. Makers of cars and higher-value goods are spending billions of dollars to expand Chinese production. For example, German carmaker Volkswagen said in May it would spend $2.2 billion to buy control of Chinese electric vehicle and vehicle parts producers.

Instead of manufacturing for export from China, some companies are planning to sell within the country. "Now a lot of people are producing ‘local for local,'" said Jit Lim.

Joe McDonald reported on this story for the Associated Press. Pete Musto adapted it for VOA Learning English. Mario Ritter, Jr. was the editor.

source –n. someone or something that provides what is wanted or needed

consumer –n. a person who buys goods and services

supply chain –n. the series of processes involved in the production and distribution of a given good or service

ingredient –n. one of the things that are used to make a food or product