US Jury Finds Teen Not Guilty of Murder

Update Required To play the media you will need to either update your browser to a recent version or update your Flash plugin.
By Hai Do
19 November 2021


An American teenager on trial for murder in Wisconsin was found not guilty Friday of all charges related to the shooting deaths of two men and the wounding of another.

Rittenhouse shot the men with a semi-automatic weapon. The shootings took place during street protests and property destruction over police violence against Black people in the summer of 2020. The teenager is white. Those he shot also were white.

A jury of 12 men and women found Rittenhouse not guilty of five charges including homicide, or murder, attempted homicide and reckless endangering.

Government lawyers told the jury that Rittenhouse had gone looking for trouble that night. They said he had created a dangerous situation by pointing his weapon at protestors. And, they noted that he showed no remorse over the killings.

The defense said that Rittenhouse had been repeatedly attacked and had shot the men in fear for his life. They said he had been in Kenosha to protect private property after several nights of unrest in the town south of the city of Milwaukee. The unrest followed the police shooting of a Black man named Jacob Blake.

Rittenhouse said, "I did what I had to do to stop the person who was attacking me." Some of the videos shot by people in the area appeared to support his claim of self-defense. Wisconsin law says a person can use deadly force to defend himself if he "reasonably believes that such force is necessary to prevent imminent death or great bodily harm to himself or herself."

After the decision, the parents of Huber who was shot and killed, Karen Bloom and John Huber spoke to the press. They said the outcome "sends the unacceptable message that armed civilians can show up in any town, incite violence, and then use the danger they have created to justify shooting people in the street."

Rittenhouse was 17 when the events took place in Kenosha. His home is in nearby Antioch, Illinois. 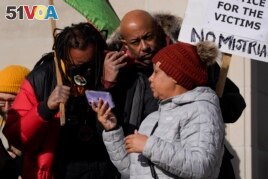 Justin Blake, left, uncle of Jacob Blake, listens to the verdict being read outside the Kenosha County Courthouse, Friday, Nov. 19, 2021 in Kenosha, Wis.

The case was one of three trials in the United States that showed the division over race in the country. In the American state of Georgia, three white men are on trial in the killing of Ahmaud Arbery, a Black man. And a trial is taking place in Virginia over the deadly gathering of white supremacists in Charlottesville in 2017.

Wisconsin Lieutenant Governor Mandela Barnes, who is Black and a Democratic candidate for U.S. Senate, denounced the outcome of the Rittenhouse trial.

She said, "We have seen so many black and brown youth killed, only to be put on trial posthumously, while the innocence of Kyle Rittenhouse was virtually demanded by the judge."

Former Wisconsin Governor Scott Walker, a Republican, praised the verdict. He wrote on Twitter, "All of us who knew what actually happened in Kenosha last year assumed this would be the verdict. Thankfully, the jury thought the same."

Hai Do wrote this report for VOA Learning English with additional reporting from the Associated Press and Reuters. Mario Ritter was the editor.

semi-automatic –n. able to fire bullets one after the other quickly but not automatically

reckless –adj. not showing the correct concern about the possible bad results of your actions

assume –v. to think that something is true or probably true without knowing that it is true

verdict –n. the decision given by a jury at a trial