Update Required To play the media you will need to either update your browser to a recent version or update your Flash plugin.
By Hai Do
13 May 2020


California State University, the largest university system in the United States, announced that it will move online all fall season classes because of the coronavirus.

In a statement on Tuesday, Chancellor Timothy White said, "Virtual planning is necessary because it might not be possible for some students, faculty and staff to safely travel to campus." The announcement came on the same day U.S. health experts warned that reopening the country too soon could result in suffering, death, and harm to the economy.

The California State University (Cal State) has 23 campuses and nearly 500,000 students. It is the first major university to tell students that they will not return to campus when the new school year begins. 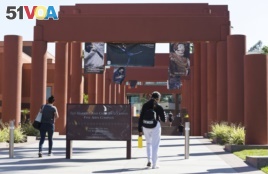 Some colleges, including University of Pennsylvania and University of California at Berkeley, say some or all teaching for the fall may be provided online. Others, like Stanford, Princeton and the University of Chicago, are waiting for more information before making decisions.

The Chronicle of Higher Education magazine is keeping a list of colleges' plans for reopening. It says the large majority of American colleges, 70 percent, say they are planning for in-person classes when the new school year begins.

Christina Paxson is the president of Brown University in Rhode Island. She wrote in The New York Times newspaper that the "reopening of college and university campuses in the fall should be a national priority."

Paxson said colleges should develop plans to control the spread of infections through testing, tracing and physical distancing to bring students back on campus.

Many colleges are already worried that large numbers of students will not return for online classes. There is widespread fear that the troubled economy will leave many Americans unable to pay for college. And international students will not attend because of travel restrictions during the coronavirus crisis.

Several universities, including Ohio State and Nebraska, have returned money to students for housing and meals to students after in-person classes were cancelled. Students across the U.S. are also taking legal action against universities. The students say they did not get the quality of education they were promised.

In a legal action against Drexel University, Grainger Rickenbaker, a 21-year-old student from South Carolina, said the online classes were poor substitutes for classroom learning. He told the Associated Press that some classes were being taught almost entirely through recorded videos, with no class discussion possible.

On Tuesday night, Chancellor White told the Cal State's Board of Trustees that the university "is a place where over 500,000 people come together in close and vibrant proximity with each other on a daily basis." He noted that is not possible now.

The university leader listed several possible exceptions for in-person classes, including those in nursing, science, and art.

Hai Do wrote this story with information from Cal State and the Chronicle of Higher Education. Caty Weaver was the editor.

virtual - adj. occurring on computers or the internet

faculty - n. the group of teachers in a college

staff - n. a group of people who work for an organization or business

campus - n. the area and buildings around a university

priority - n. something that is more important than other things

trace - v. to find out where something came from

vibrant - adj. having or showing great life, activity and energy