Update Required To play the media you will need to either update your browser to a recent version or update your Flash plugin.
By VOA
18 May, 2015


A coalition led by the United States has increased airstrikes targeting Islamic state militants in the city of Ramadi. And Shi'ite Muslim forces are also preparing to deploy to the city.

Over the weekend, the Islamic State group claimed to have seized the entire city. However, the U.S. Defense Department questions that claim.

Hundreds of people reportedly were killed when militants entered the city overpowering Iraqi troops. AP and Reuters news agencies say thousands of people have fled the city in the past few days. 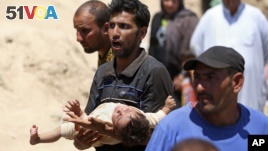 Ramadi is mainly a Sunni Muslim city. Prime Minister Haider al-Abadi approves the Shi'ite militia's redeployment to Ramadi although he had concerns over sectarian divisions there.

US Secretary of State has strong words for North Korea

The U.S. Secretary of State John Kerry says the US has almost ruled out renewed talks with North Korea over its nuclear program. Instead, Mr. Kerry called for strengthening U.S. military alliances in the area. He also called for increasing international pressure to counter North Korea's behavior and disregard for human rights.

Mr. Kerry said the U.S., South Korea, and Japan alliance will continue to deploy the weapons and forces needed in the area.

Officials say 38 civilians and more than 30 police were injured during a protest in China's Sichuan province. AP reports that the protesters were angered at a plan to build a railway would not include their community.

The county government of Linshui said in a statement that 100 protestors attacked police and burned vehicles on Saturday. Forty people were detained Saturday and 20 more were arrested Sunday when the crowd again gathered. It is not clear if those held have been released.

The Council said in a statement last Sunday that a government offensive in Unity State causes violence that displaced 100,000 people. The unrest also halted aid delivery to civilians in the area.

The Security Council also blamed the rebels for launching an attack on the town of Malakal in Upper Nile state.

A group of East African nations has been trying to mediate the conflict between President Salva Kiir's government and rebels supporting former Vice President Riek Machar.

And nine people were killed in gun violence between members of at least three opposing motorcycle gangs in the city of Waco, Texas. The violence took place Sunday at a drinking place. Members fought with knives and fists. Police say several people were injured in addition to those killed.

rule out – v. to no longer consider

counter – v. to do something in reaction to an action or event

humanitarian – adj. meant to improve the living conditions of others

mediate – v. to work with opposing sides in an argument or dispute