US Lawmakers Try Again to Keep Guns from Mentally Ill

Update Required To play the media you will need to either update your browser to a recent version or update your Flash plugin.
By VOA
13 June, 2014

New legislation in the United States is aimed at keeping guns out of the hands of the severely mentally ill while helping them get the medical treatment they need.

Christopher Cruise has more on that story.

U.S. lawmakers are again talking about gun laws after two more deadly mass shootings. In late May, a gunman killed six students on a college campus in Santa Barbara, California. And in early June a shooter in the state of Oregon reportedly shot and killed a student in a high school before shooting himself.

In New York City, a street artist creates a memorial for the 26 children and educators killed in the Sandy Hook Elementary School massacre. (June 14, 2013)
Since the mass shooting at Sandy Hook Elementary School in December 2012 where twenty-six young children, teachers and administrators were killed, there have been seventy-four school shootings across the United States.

The U.S. Congress is again debating gun laws. But this time the debate is narrower. It does not involve every issue related to gun control, which divides legislation along party lines.

Lawmakers, both Democrat and Republican, are placing their attention on the relationship between gun violence and mental illness. Laws barring the mentally ill from gun ownership already exist in the U.S.

The question is -- do they go far enough? 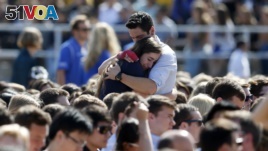 Students console one another at the University of California Santa Barbara during a memorial service in honor of the victims of the shooting there on May 27, 2014.
The gunman in the Santa Barbara shooting was Elliot Rodger. Unlike other recent gunmen, the parents of Elliot Rodger warned police about the possible threat posed by his mental illness.

At a meeting on Capitol Hill, U.S. Representative Tim Murphy says that all the recent mass shootings have one thing in common -- the accused killers all suffered from some sort of mental illness.

"All had untreated or under-treated serious mental illness. All spiraled out of control within a system that lacked the basic mechanisms to help."

Representative Murphy has introduced legislation that would make it easier for families to have seriously ill relatives hospitalized against their will. The condition in the legislation is that they must also be found to be a threat to themselves or the community.

A parent of a mentally ill child says he supports the bill. Edward Kelley says his severely mentally ill son refuses help and often has often ended up living on the streets. He describes his son's life. He describes it as a "descent into madness."

"Our resume as a family covers 15 years of dealing with our son descending into a madness that is just impossible to describe."

Most experts agree there is not enough space in mental hospitals. Experts also agree that the seriously ill often end up in crowded emergency rooms or homeless. D.J. Jaffe of the Mental Illness Policy Organization said the U.S. also needs to change its spending priorities.

"My one message is we have to stop ignoring the most seriously ill."

Democratic lawmakers are proposing a separate bill that would ban people who have been involuntarily hospitalized from buying guns.

Former Representative Gabrielle Giffords survived a 2011 mass shooting in the area of Arizona that she represents. 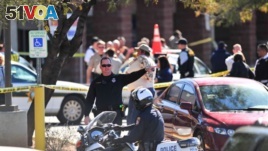 Emergency workers gather at the scene of a shooting involving Democratic Representative Gabrielle Giffords of Arizona at a Safeway grocery store in Tucson, Arizon. (Jan 8, 2010)

(One of the 911 Emergency Calls for Arizona shooting.)
"911. Where is your emergency?"
"Near the Safeway (a store). There's some shots fired."
"Okay. We have reports of that. Deputies on our their way. Thank you."
"Giffords has been hit."

While campaigning she was shot in the head by a gunman who, according to medical experts, suffers from severe mental illness.

"We must do something. It will be hard, but the time is now. You must act." 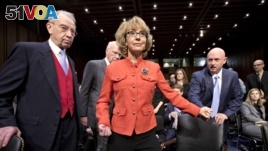 Former Arizona Rep. Gabrielle Giffords was seriously injured in the mass shooting that killed six people in Tucson, Arizona. She arrives on Capitol Hill in Washington for a hearing on gun laws.
Some lawmakers say they believe Republicans and Democrats can agree, or find common ground, on the issue of guns and mental illness. Both parties say they want to prevent future tragedies.

This story was written with reporting by VOA Congressional Correspondent Cindy Saine reporting from Capitol Hill.

What do you think about the debate involving guns and the mentally ill? Share your views in our comment section.
Related Articles
go top