Update Required To play the media you will need to either update your browser to a recent version or update your Flash plugin.
By Phil Dierking
20 September, 2018


The United States may have regained the position of the world's biggest oil producer sooner than expected.

The energy information administration, which is part of the Department of Energy, released a report on September 12. The agency said its findings were based on oil production estimates.

If those estimates are right, it would mark the first time since 1973 that the United States has led the world in oil production, based on government records. 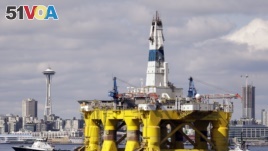 FILE - The oil drilling rig Polar Pioneer is towed toward a dock in Elliott Bay in Seattle, May 14, 2015. The rig was the first of two drilling rigs Royal Dutch Shell was outfitting for Arctic oil exploration. President Barack Obama has designated the bul

The energy administration and another organization, the International Energy Agency, had predicted that the U.S. would not pass Russia and Saudi Arabia until 2019. The agency is an international group of oil-consuming nations.

An increase thanks to fracking

U.S. production rose in recent years partly because of technology, including hydraulic fracturing, or "fracking."

Fracking is the use of chemicals, sand, water and high pressure to break up rock formations deep below ground. This releases more oil and natural gas.

Not everyone approves of fracking, however. Opponents say that fracking results in harmful substances entering groundwater. They also say it has increased the number of earthquakes in states like Oklahoma and Texas.

The agency expects the U.S. will continue to produce more oil than Russia and Saudi Arabia for the rest of this year and through 2019.

The U.S. agency said its information on Russian production comes mostly from the Russian Ministry of Oil, and also oil companies and industry publications. The agency said numbers on Saudi production are based on its own estimates.

The United States led the world in oil production for much of the past century. However, both the Soviet Union and later Saudi Arabia passed the U.S. during the 1970s. Up until the past few years, it seemed unlikely the U.S. would ever become the top producer again.

Daniel Yergin wrote a book called "The Prize," which is a history of the oil industry. He says the increase in U.S. production helped avoid a severe shortage of oil that would have caused prices to rise even higher.

David Koenig reported this story for the Associated Press. Phil Dierking adapted the story for VOA Learning English. George Grow was the editor.

barrel - n. a round usually wooden container with curved sides and flat ends