Update Required To play the media you will need to either update your browser to a recent version or update your Flash plugin.
By Hai Do
11 December, 2018


The United States is adding Pakistan to its list of nations that have taken part in or permitted "systemic, ongoing and egregious violations of religious freedom".

Secretary of State Mike Pompeo said in a statement Tuesday that he added Pakistan to the U.S. list of "countries of particular concern." The State Department is required by U.S. law to rate religious freedom by country every year. 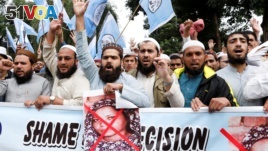 Supporters of Muslim Student Organization (MSO) chant slogans during a protest after the Supreme Court overturned the conviction of a Christian woman sentenced to death for blasphemy against Islam, in Islamabad, Pakistan, Nov. 2, 2018.

The country had earlier been on a U.S. special watch list for religious freedom. The action Tuesday means that Pakistan could become a target of U.S. sanctions. However, such measures have generally been ignored in the past.

China, Eritrea, Iran, Myanmar and North Korea all appear on the new list of "countries of particular concern". Sudan, Saudi Arabia, Tajikistan and Turkmenistan are also named. All of the countries were also named on the list last year.

Uzbekistan had formerly been named a "country of particular concern," but Pompeo moved it to the special watch list this year. The watch list now also includes the Comoros Islands and Russia.

Pompeo also named several Islamic militant groups as "entities of particular concern" as they do not meet the definition of countries.

The groups are the al-Nusra front in Syria, Somalia's al-Shabab, Boko Haram in West Africa, Yemen's Houthi rebels, the Islamic State, the Taliban and al-Qaida in the Arabian Peninsula.

"In far too many places across the globe, individuals continue to face harassment, arrests, or even death for simply living their lives in accordance with their beliefs," Pompeo said. "The United States will not stand by as spectators in the face of such oppression."

The Associated Press reported this story. Hai Do adapted the report for VOA Learning English. George Grow was the editor.

entity - n. something that exists by itself

harassment - n. act of constantly and repeatedly bothering someone

spectator - n. a person who watches an activity