Update Required To play the media you will need to either update your browser to a recent version or update your Flash plugin.
By VOA
24 July, 2015


The United States military says it must prepare to deal with two different threats at the same time. The threats come from aggressive moves by Russia and China and the influence of extremist groups like the self-proclaimed Islamic State.

Experts say it will not be easy for the military to do.

This month, U.S. Secretary of Defense Ashton Carter spoke to soldiers at Fort Bragg in the state of North Carolina. He says their skills and experiences of fighting terrorists in Iraq and Afghanistan will be useful in future conflicts. 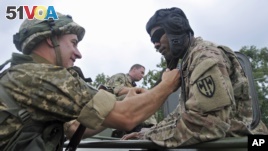 US and Ukrainian servicemen talk during the opening ceremony for the Rapid Trident/Saber Guardian 2015 military exercises in Ukraine, July 20, 2015. (AP Photo/Pavlo Palamarchuk)

He says the military is, "moving into a different direction in the future, where we try to capture what we learned -- and we learned a lot in the course of those two wars -- and turn that skill and that experience to the kinds of conflicts that are going to determine our future."

In June, American military officials published a new National Military Strategy after four years. The document says the threat of a war with another country is low, but growing. It says the American military will closely watch Russia, Iran, North Korea and China.

Bryan Clark is a former U.S. Navy strategist. He is now a senior fellow at the Center for Strategic and Budgetary Assessments. The center researches security and defense issues. Mr. Clark says Russia, Iran, North Korea and China have security goals that are likely to conflict with those of the U.S. in the near future.

He says the American strategy is changing because of Russia's aggression in Eastern Europe and China's activities in the South China Sea. The U.S. must prepare to fight a war with a large country while fighting terrorists at the same time.

China not an enemy -- but not a friend, either

The strategy document says Iran, Russia and North Korea are threats to world peace. But it describes China differently. It says the United States wants to help China grow. It hopes a strong China will help increase international security. But that does not mean the military believes there is no risk of conflict with China.

In Mr. Clark's words, the American military "sees China as a much more significant threat to U.S. national security interests." China has a larger economy and more population than other nations. He notes that China has advanced military weapons similar to Russia, and many more of them. And China is moving aggressively against American allies in the South China Sea.

Fighting more than one war at the same time

Defense Secretary Carter says the U.S. military must be able to deal with challenges in more than one area. He says the country needs a military that is not only big enough but has enough equipment and well-trained troops. And he says military pay must be high enough to attract and keep good troops.

Whatever happens, the American military will need to meet the challenges with fewer soldiers than it has now. The Defense Department has announced plans to reduce the size of the Army by 40,000 soldiers.

VOA's Li Bao reported this story from Washington. Christopher Jones-Cruise adapted it for VOA Learning English. Hai Do was the editor.

self-proclaimed – adj. giving yourself or your group a particular name or title, often without any reason or proof that would cause other people to agree with you

strategy – n. a careful plan or method for achieving a particular goal, usually over a long period of time

conflict – v. disagrees with; takes a different position from

Do you agree with the US military's plan to prepare to deal with two possible future conflicts at the same time? We want to hear from you. Write your thoughts in the comments section.