US Military Searching for Boat People in Southeast Asia

Update Required To play the media you will need to either update your browser to a recent version or update your Flash plugin.
By VOA
26 May, 2015


The United States embassy in Bangkok says the U.S. military is using aircraft to collect information off the west coast of Malaysia. It says the flights are part of efforts to find thousands of migrants. They are believed to be stranded at sea on unsafe wooden boats.

The U.S. operation began on May 24 after American officials informed governments in Southeast Asia. An American embassy official said the U.S. has offered to help the governments "improve their understanding of the situation in the Andaman Sea and Bay of Bengal."

Embassy officials said they did not have information about the number of search flights or the aircraft involved.

Earlier this month, Thailand launched a campaign against way stations for migrants along the border with Malaysia. Human traffickers operate such stations to move migrants out of the area, often by boat. 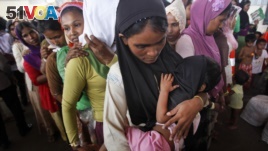 An ethnic Rohingya woman breastfeeds her young child as she waits to receive Muslim headscarfs donated by local residents at a temporary shelter in Aceh province, Indonesia, May 18, 2015.(FILE PHOTO)

Some smugglers abandoned the boats and their passengers at sea. The boats are made of wood, and often overcrowded or unsafe. People on them have little or no food and water.

Indonesia, Malaysia and Thailand earlier had turned away the overcrowded boats. That led to international criticism of the three countries. Last week, Indonesia and Malaysia announced they would temporarily permit the boat people to land so they could be returned home or settled somewhere else.

The passengers are Rohingya Muslims from Myanmar and Bangladesh. Myanmar is a mostly Buddhist country. It does not, for the most part, recognize the Rohingya as citizens.

About 140,000 Rohingya have been displaced since the middle of 2012 because of unrest in Rakhine state.

Already this month, several thousand migrants have been rescued from waters near Indonesia and Malaysia or swum to land. Rights groups believe thousands more could still be at sea.

Officials from the United States, Thailand, Malaysia and other countries will meet in Bangkok on Friday to discuss the crisis.

On Tuesday, crews in Malaysia were recovering bodies from 139 burial areas in the northern part of the country.

Malaysian officials say 28 camps for migrants were found between May 11 and 23 in hard-to-reach mountainous jungle areas. They say the largest camp was able to hold up to 300 people.

Rights groups have accused Malaysia and Thai officials of ignoring the problem. The groups also say there was evidence of involvement by corrupt officials.

"Clearly, this area has been an enclave for these ransom-for-release camps," said Phil Robertson, Human Rights Watch's deputy Asia director. He added, "I don't believe for a second that that could take place without connivance, at some level, by the authorities."

strand – v. to leave (a person or animal) in a place without a way of leaving it

abandon – v. to leave and never return to

smuggler – n. someone who moves or tries to move (someone or something) from one country to another illegally and secretly

connivance – n. to secretly permit or be involved in wrongdoing

We want to hear from you. Write your thoughts in the comments section.