Update Required To play the media you will need to either update your browser to a recent version or update your Flash plugin.
By Bryan Lynn
25 April 2021


The U.S. military has chosen three companies to develop nuclear thermal propulsion, or NTP systems to be tested in space by 2025. The goal is to test the space travel technology in cislunar space – the area between Earth and the moon.

The U.S. Department of Energy describes on its website how an NTP system works. It needs a radioactive material such as uranium and another element, such as hydrogen, in liquid form. The liquid propellant is pumped through a reactor core. This causes uranium atoms to break apart inside the core and release heat. The heat turns the propellant into gas, which expands through an opening to produce thrust.

The contracts to produce a flight demonstration of NTP technology were awarded by the military's Defense Advanced Research Projects Agency, or DARPA. The winning contractors were General Atomics, Blue Origin and Lockheed Martin. DARPA did not announce how much the contracts were worth.

In a recent announcement about the project, DARPA said the area of space, or "space domain," will be very important to business, scientific discovery and national defense. Establishing "space domain awareness in cislunar space...will require a leap-ahead in propulsion technology," the agency said.

The agency added that one of the most important abilities of modern military operations is for forces to be able to react quickly to threats on land, at sea and in the air. However, doing this in space is difficult because current spacecraft designs lack the necessary speed and propellant power. 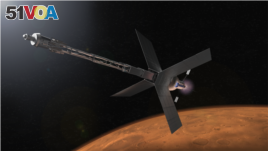 This NASA illustration depicts a Mars transit habitat and nuclear propulsion system that could one day carry astronauts to Mars. (Image Credit: NASA)

The project is called the Demonstration Rocket for Agile Cislunar Operations, or DRACO. It aims to have a rocket successfully demonstrate a working NTP system above low Earth orbit by 2025. The companies will be working to develop and demonstrate reactor, propulsion and spacecraft systems.

Air Force Major Nathan Greiner is the program manager for DRACO. "The NTP technology we seek to develop and demonstrate under the DRACO program aims to be foundational to future operations in space," he said in a statement.

DARPA said the first part of the demonstration process is to be carried out in two parts or "tracks." This process will last 18 months.

The first track will create a design for an NTP reactor and propulsion system. The second will produce an "operational system spacecraft concept" for demonstration purposes. The early development process will center on "risk reduction" efforts on the path to reaching the "on-orbit demonstration" by 2025, DARPA said.

The U.S. space agency NASA has long been interested in nuclear propulsion systems to power its spacecraft of the future. But the technology has not yet been demonstrated.

NASA has said that in recent years, its engineers have been considering NTP technology to support future missions to the moon and Mars. NASA is also considering a related technology, nuclear electric. That system uses propellants much more efficiently than chemical rockets, but provides a much lower amount of thrust compared to NTP.

NASA says it is working with the Department of Energy on the design and development efforts.

NASA said in a statement in February that its main goal with nuclear propulsion would be to greatly reduce the amount of time it takes crews to travel between Earth and Mars. With chemical propulsion, the trip to Mars would take about seven months. But with an NTP system, it could take three to four months. This would permit more trips, while improving the safety for astronauts in future space travel, NASA officials said.

Bryan Lynn wrote this story for VOA Learning English, based on reports from DARPA and NASA. Mario Ritter, Jr. was the editor.

propulsion – n. a force that moves something forward

propellant – n. an explosive substance of fuel that causes something to move forward

core – n. the basic and most important part of something

efficient – adj. capable of producing the desired results without wasting time and energy