US Military to Review Mental Health Care for Service Members

Update Required To play the media you will need to either update your browser to a recent version or update your Flash plugin.
By Faith Pirlo
15 October 2022


Suicide rates among active members of the U.S. military are on the rise. As a result, the U.S. Pentagon and the secretary of defense are examining ways to change their mental health programs.

Between 2015 and 2020, the number of suicides of active-duty service members increased more than 40 percent. In 2020 alone, the number increased by 15 percent.

The Cost of War Project is a research effort based at Brown University. Last year, it carried out a study on the number of current and former military members who have died in the past 20 years. The study found that the number who died by suicide is four times higher than the number who died while fighting. Its count dates back to the September 11 terrorist attacks. 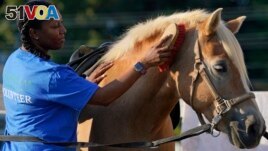 In March, U.S. Secretary of Defense Lloyd Austin announced an examination of the military's mental health and suicide prevention programs by an independent committee.

Austin said it was important that the military takes care of its members. "Clearly, we have more work to do," he said.

In 2021, the Army issued new guidelines to its commanders about how to deal with the mental health of its service members. However, many long-term difficulties are still present. Many soldiers do not talk about mental health struggles because of the stigma surrounding it. For those who do speak up, many find out that the stigma is real.

There are charitable organizations for service members that offer additional support programs. Some organizations center their efforts on recreation and outside activities such as fishing competitions in Alaska. Others give support for self-care, including the YMCA's Armed Services programs. These programs offer free childcare so that members with children can find time to attend therapy.

Army Secretary Christine Wormuth visited the Joint Base Elmendorf-Richardson earlier this year. The base is in the far-northern state of Alaska, where suicide rates are especially high.

During her visit, Wormuth heard from healthcare workers who said they do not have enough workers, are burned out and cannot see patients as often as they need. Soldiers there must wait weeks for an appointment.

One longtime therapist said to Wormuth, "We have people who need our services and we can't get to them. We need staff and until we get them, we will continue to have soldiers die."

Service members say that when they speak up about needing help, it is difficult to receive the services they need.

Dionne Williamson is a 46-year-old Navy lieutenant commander. After she finished a tour in Afghanistan in 2012, she said she could not feel her feelings. She also experienced other symptoms like memory loss and tiredness, as well as depression.

"It's like I lost me somewhere," said Williamson, "I went to my captain and said, 'Sir, I need help. Something's wrong.'"

Williamson said that she fought for years to get time off and go to therapy.

"It's a wonder how I made it through," she said.

She went into the hospital for a month. She took part in a therapy program that includes horses and horseback riding. The program was a breakthrough for Williamson.

Working with and riding horses has proven to be helpful for people with physical and mental disabilities, especially children. In recent years, horse therapy has also been helping service members with anxiety and post-traumatic stress disorder (PTSD).

Williamson now rides horses often at the Cloverleaf Equine Center in Clifton, Virginia. There, riding is combined with other therapies.

Shelby Morrison is Cloverleaf's communications director. She said, "In order to be able to work with horses, you need to be able to regulate your emotions. They communicate through body language and energy."

Morrison added that service members come with "a lot of anxiety, depression, PTSD. ... We use the horse to get them out of their triggers."

The riding sessions helped calm Williamson. She said she feels good for the first time in a long time. But, she said, she still struggles.

Ashraf Khalil wrote this article for The Associated Press. Faith Pirlo adapted it for Learning English.

charitable – adj. done to help people who are poor, sick or in need

therapy – n. the treatment of a physical or mental illness

staff – n. workers for a particular organization or company

symptoms – n. a change in the body or mind that shows the presence of a disease

anxiety – n. fear and nervousness about what might happen

post-traumatic stress syndrome (PTSD) – n. a condition of extreme stress caused by a shocking or severe event in the past

regulate – v. to bring (something) under the control of authority

trigger – n. something that causes something else to happen